The Effect on Tradition, Health and Individual Rights

The pervasive nature of GMO (Genetically Modfied Organism) foods and the corporations who benefit is subject matter that affects us all. I became aware of just how pervasive this issue had become when I was at a conference several years ago. A Zuni man told of the danger to his Native corn crop; he feared cross-contamination from GMO-planted fields nearby or even seeds blowing over from trucks transporting them. Should it happen then his corn would no longer be that grown by his ancestors for centuries. Crop purity was his concern as his right to maintain tradition. The Zuni man isn’t alone as farmers all over are fighting to keep their heritage crops. 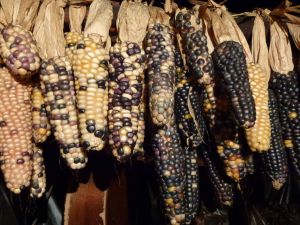 Kenosis Spirit Keepers is collaborating with Grandmother Flordemayo of the International Council of 13 Indigenous Grandmothers to help fund her Native Seed Temple for just that reason—preservation of tradition. Elders are already bringing her seeds for safekeeping and propagation.

We Are What We Eat

But beyond that the use of GMOs in our food boils down to real questions about our health and individual rights to actually know what we’re eating. There’s so much media coverage about the amount of fast food in the American diet. The proliferation of GMOs must be equally as concerning.

The following paragraphs were provided by GMO-Free Prescott, a 501(c)3 nonprofit organization, promoting grassroots efforts that encourage informed and nourishing food options and choices through education and public awareness.

Is the Genetic Engineering of Food Life-Affirming?

Let’s begin by asking: What does “life-affirming” mean? Life-affirming means that it gives you a new faith in life. It reminds you that life is good and that everything will be fine; something that promotes life or celebrates life rather than the destruction of it.

The patenting of life forms has become the subject of a growing worldwide campaign by citizen groups, environmentalists, scientists, farmers’ organisations and also religious leaders. They believe that animals, plants, humans, microorganisms and their parts such as genes and cells, should not be patentable as these life forms are creations of God and Nature.

A further inquiry might be: Does our experience with genetic engineering and GMOs over the last twenty years align with the previous statements?

October is National Non GMO Month. The October 24 Lifepath Dialogues Gathering will be guest hosted by GMO-Free Prescott as an educational outreach to the community—and it happens on National Food Day. Held 6:30-8 PM at Creekside Center, 337 N. Rush Street in Prescott as usual.

2 thoughts on “What Legacy GMOs?”