A Tribute to Glenn Woody 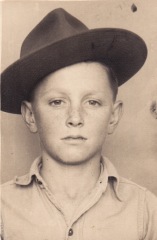 My father Glenn Woody was born into the Dust Bowl of Delhart, Texas, up in what’s called “The Panhandle.” His mother succumbed to complications of childbirth shortly after, and his father was already an elder. Dad was the last of twelve, a good gap in years from the next youngest. His was not an easy childhood and nurturing was absent.

The family was literally dirt poor. I’d seen a few yellowed photos of a broken down, unpainted house set on bare ground with my grandfather, father, and what kids were still left at home, posing out front. But I really had no idea how dire the conditions until I was visiting my folks at their home in Ohio over Thanksgiving last year, and we watched The Dust Bowl, a documentary of those times by Ken Burns. That night my dad began telling about his growing up years, in a way he hasn’t done before. He’s a quiet man who keeps most of his thoughts to himself, the exception was his professional life. I’m glad he decided to open this line of communication.

Before my father’s time my grandfather was well-off, owning a six-hundred acre farm that he intended to divide equally and leave to his children. But the relentless winds and flying dirt endured through several years withering everything in sight, including the old man’s dreams. My grandfather finally picked up the family left at home and moved to Elkhart, in East Texas, where life was marginally better but not much. It sounds like, in the end, he was defeated.

I’m writing of these things because origins are important. The direction of my father’s future and outlook could have been repetitive of the household where he grew up. That’s what usually happens. But it wasn’t that way. I’ve just returned from another visit with my folks. We’ve been discussing family line in much detail. My mother told me that, in those early years of their marriage, my dad would tell her nothing was going to stand in the way of his success. To this day—at the age of eighty-one—tenacity is a major part of his make-up, integrity a partner. Those two qualities served him well and, as far as I can tell, he did indeed achieve those things in life that he deemed important. 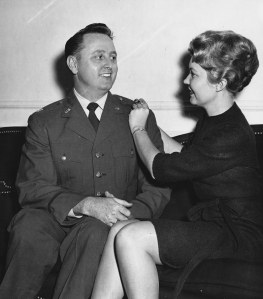 Glenn and Sue Woody during
an Air Force promotion ceremony.

He entered the Air Force as an enlisted man, got out, went to college and then law school. One of my earliest memories was of him studying, consistently. Dad returned to the Air Force and retired as a lieutenant colonel, choosing to end that leg of his career rather than accepting orders to Washington DC that would put him on the track to general officer. He went on to serve as a senior trial attorney in civilian service for almost an equal number of years. The accolades given him over the years were many in the places he served in-country and overseas. That’s about career.

Several months ago, Dad was interviewed for the Veterans History Project sponsored by the Library of Congress. Once the video has been edited it will be placed on his page with photos and more. A story he told in that interview really speaks to the kind of person he is. He talked about his time in Vietnam, something he has only started to do recently. He was stationed at Phan Rang, one of the most bombed air bases, and ran the legal office. His predecessor handed down a high rate of court martials related to drug charges, without consideration to severity of usage or situation. Not so with my father. He told the GIs he had no tolerance for hard drugs like heroin. With marijuana he’d give them one chance. He used reason and benefit of the doubt. Court martials were drastically reduced as a result. But I think the next disclosure touched me most. On Sundays, his only day off, he left the base and visited the troops in the outer reaches, physically got down in the trenches with them and asked after their welfare. That’s something that wasn’t in his charter—and put his own life in jeopardy in the course of doing so. 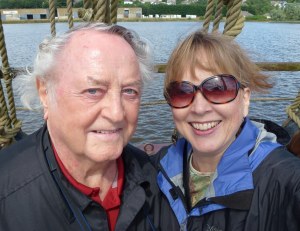 Dad and me during our
Summer 2012 vacation in Ireland.

My mother and I have always been of utmost importance to him. He calls us “his ladies.” And he has an affectionate but silly nickname for me that only a few of my closest friends know. We didn’t always get along. Particularly when I was a teenager, we butted heads. I’ve been told that, in some ways, my dad and I are alike. Tenacity is known to turn into stubbornness at times. We could hold our separate positions well if we had different ideas on something I should do. All that has mellowed with age.

Most importantly, my dad taught me about not giving up, to keep on keeping on when it’s something I value deeply, even in the face of great obstacles, and upholding integrity. I couldn’t have asked for a better role model.

On this Father’s Day I want to say…Dad…I’m proud to be your daughter.