A Primer on Food and Our Collective Vote Toward WellBeing

Food is fundamental to way of life. Quality can be measured through its nutritional make-up. But there’s more. Increasingly, what we eat and how food is produced has become the prophecy of our future—unless we stop it now.

Since the start of the Industrial Age in the 1940s, the push has been to produce more food. The means involved use of more bio-fuels, synthetic fertilizers and focus on monocrops, breeding out diverse strains and heritage crops. In one sense it’s been hugely successful, quite profitable for the corporate giants who engineered the chemical experiment. Supermarket shelves are full of GMO foods like corn, cottonseed, wheat, soya and sugar beets in one form or another. Currently, 88 percent of corn, 93 percent of soybeans and 94 percent of cottonseed grown in the US are GMO.

What is at stake?

It’s tough on the environment. When monocropping is used instead of traditional crop rotation, it depletes nutrients in the soil, threatening healthy growth. To support production, farmers must use chemical fertilizers and pesticides—liberally. The earth is further depleted; chemicals get into ground waters, or carried by air, resulting in pollution.

The huge agribusinesses like Monsanto, DuPont and Dow want to make sure growers remain dependent, even shackled. Monsanto claims a patent on their seeds; their policy bars seed saving after harvest for use in the next planting, a practice farmers have historically undertaken. Now they are forced to purchase GMO seeds year and after. If a farmer ignores the policy…Monsanto sues. There are currently eight cases before the US Supreme Court. Yet, how can you patent something provided by Mother Earth? 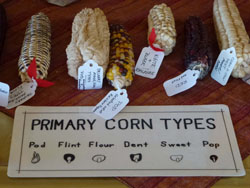 An entire American way of life is threatened and will soon be extinct. The US Department of Agriculture shows that the number of family farms in the US has dramatically dropped from 6.8 million in 1935 to merely 2 million in 2012, while food production continues to rise through the corporate agri farms. It’s just no longer economically sustainable for small farms to operate. Quite soon the family-run farms will go the same way of mom and pop restaurants, grocery stores and bookstores, overwhelmed by corporations. Farm Aid statistics show about 330 farmers give up each week.

But also consider the health risks. The American Academy of Environmental Medicine (AAEM) indicates that several animal studies show GM foods pose such serious health risks as infertility, immune issues, and changes in the gastrointestinal system and other major organs. Indeed, when squirrels and mice are given the choice between GMO and non-GMO foods, they won’t touch the former, which says it all.

Aside from all the concerning statistics and studies, the focus on food as commodity merely reflects the mindset that humans themselves are considered for their economic value. In the corporate workplace, the push to produce, astronomical work hours and competition serve to further disconnect people from each other and any spiritual grounding. Food is something eaten in a hurry from a packaged container or fast food wrapper. There is little to no connection with the very elements that serve to give us life.

We vote every day by where we shop, what we buy and choose to put in our bodies. We have the power to make a difference toward collective health and well-being.

Michael Snyder. “The Family Farm Is Being Systematically Wiped Out of Existence in America.” The Economic Collapse Blog, April 26, 2012.