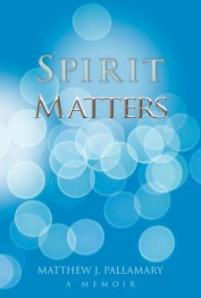 Matthew Pallamary has written an uncensored memoir of his journey through the violent jungle of his origins to the deep interior of his heart and mind—finally delivering him to the Amazon rainforest of Peru and the person he is today. Spirit Matters shows us graphic realities most haven’t seen: dangerous inner city streets, the struggles to leave them behind, and a form of spirituality alternative to mainstream Western culture.

Matt is a respected San Diego writer and workshop leader at writing conferences. Initially known for his horror stories, he became interested in shamanism and Indigenous cultures, producing a book—Land Without Evil—which was recently adapted to stage. Research led him toward experiential understanding of natural substances used for centuries in religious rituals in South America and elsewhere.

Years ago, Matt and I crossed paths in Palenque, Mexico and became friends. I knew he had a rough start; he referred to himself as a Boston street fighter raised in an Irish Catholic ghetto. But I had no idea until I read this memoir; it’s a miracle he made it out alive. Such life experiences instill deep-seated limitations in the mind about what’s acceptable, possible, one’s own worth—or if anything or anyone is safe. The expected path is predictive and short. But Matt had something else operating as well: knowledge that a deeper life was available for him. The honesty in which he describes his internal conflicts, which kept him in a two-steps-forward three-steps-back shuffle for years, is poignant and real.

In this memoir, he also documents academic research on the use of visionary plants in Indigenous cultures, alluding to their use in early Christianity as well but secreted. His experiential research drew him to Mexico and then repeatedly to the Peruvian rainforest where he engaged in intensive ayahuasca ceremonies, over several days at a time, with a shaman initiated to lead them … not a spiritual journey for the faint-hearted. Ayahuasca is known to usher the traveler through a threshold to truth. The truth may be an experience of the Divine, or just as easily a slide into the Dark Night of the Soul. Either way, an instrument of transformation, as he says below.*

…I saw it in the jungle of the landscapes of my visions, the truth was that the darkness ultimately lived inside me. Ayahuasca had the ability to find and exploit my deepest fears, bringing terror in direct proportion to the depth of the particular fear it tapped into, constituting part of an amazing process of self discovery…

This is a beautiful story of one truly intrepid man, a Warrior of the Spirit if I ever knew one, who found his way out of a dark jungle, when so many of his friends and family did not. Matt Pallamary is someone to be respected for his gritty honesty and intent toward Spirit, aside from his capabilities as a writer. Spirit Matters informs us while providing inspiration.

Available in print, e-book and audiobook through Amazon. Spirit Matters was a Best Books Award Finalist for USA Book News.

*Ayahuasca is being used in the treatment of drug addiction—its success rate now documented in a clinical study in Canada. Go to MAPS to learn more and download a copy of the study.

One thought on “Book Review: Spirit Matters by Matthew Pallamary”