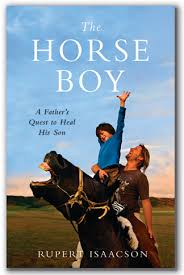 The Horse Boy came to my attention through one of the travelers on my Peru spiritual travel program. Françoise Moreels told me she was so inspired by the story, centered around autism and Mongolian shamanism, that she was compelled to journey to Mongolia herself. With an introduction like that, of course, I was drawn to read it to see what was so remarkable. And truly it is.

Imagine a young couple completely engaged in life. Rupert Isaacson was a journalist and activist for Indigenous land rights, particularly for the Bushmen of the Kalahari Desert. Kristin Neff was a professor in educational psychology at the University of Texas. Their young son Rowan just wasn’t developing the way other children did and displayed behaviors that led to a diagnosis of autism in 2004. The book is intimate in detailing all the heartbreak and frustration that comes with parenting a child with such a condition—the daily travails that are so difficult. My great respect certainly goes to these parents.

It became the father’s quest to find a way to heal Rowan. Rupert’s work being more flexible, he stayed home with Rowan much of the time. Unexpectedly, an incident occurred that eventually pointed to a path of healing. One day, Rowan broke away from his father and ran over to a horse named Betsy on a neighbor’s property, a mare known to be difficult. Strangely, Betsy was submissive to the child. And the child’s stemming and outbursts calmed. Rupert knew horses. He grew up with them in South Africa. He asked the neighbor if he and his son could ride the horse, and they did. Consistently.

It had such a positive effect on Rowan’s functioning that, after a time, Rupert had a brainstorm. Why not take Rowan to Mongolia, the place where horses were first domesticated and had become integral to the culture—and particularly their powerful form of shamanism? It took Rupert a few years to convince Kristin enough for her to reluctantly agree. But in 2007, the family began a physically and emotionally challenging odyssey across the remote steppes of Mongolia in hopes their son would be healed.

This is a story of strong intent played out against the backdrop of Mongolian shamanism. I highly recommend the book, also produced as a documentary. As a result of their experiences, Rupert Isaacson founded the Horse Boy Foundation working with autism and equine therapy. Kristin Neff founded Self-Compassion offering training in mindfulness and acceptance.

The Horse Boy by Rupert Isaacson is available on Amazon and elsewhere.

One thought on “Book Review: The Horse Boy”