I’d just left the family-run hotel where I stay when in San Cristobál de las Casas headed to Na Bolom. I was paying particular attention to my feet due to the town’s notoriously deteriorating, uneven sidewalks with potholes aplenty. When I glanced up to make sure I was still on track, I saw a painted sign, hung over a doorway enclosed by a gate, of a Classic Maya in full regalia riding a bicycle. Its paint was peeling and had seen better days. A similar image and fanciful creatures were strung out along the adobe wall. 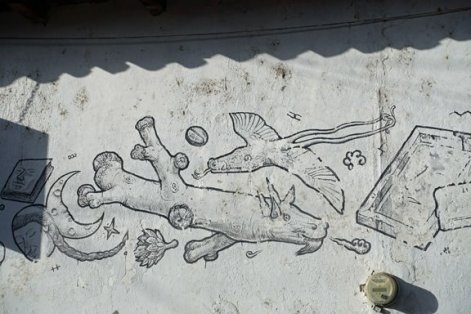 I crossed the street to peer into the courtyard. The long work tables lining the wall were filled with stacks of some kind of material – that I couldn’t readily identify – and wood block prints haphazardly hung on the wall. I didn’t see anyone around. It was just too intriguing. I opened the wooden gate and entered. I was fascinated by all the prints, more now visible on the inside wall, and saw a small room. It was stocked full of handmade books and journals, posters and postcards. I’m enamored of such hidden treasures.

I’d discovered Taller Leñateros. That was probably ten years ago. Since then, I stop by nearly every year when I’m in San Cris and purchase a book, postcard or poster. I have my own private collection of their jewels. 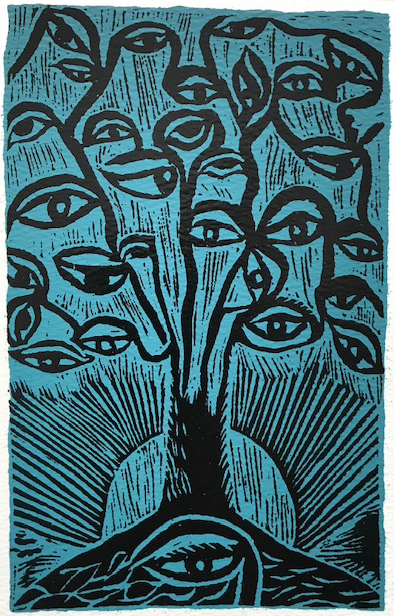 Mexican-American poet Ambar Past started this natural paper and bookmaking collective back in 1975. She’d been living among Tzotzil Maya women in the highland villages of Chiapas, Mexico and, with their permission, began to collect and translate their traditional prayers, spells and poetry, which had never been written down. Her efforts ultimately culminated in a truly unique illustrated book, Incantations: Songs, Spells and Images by Mayan Women. One time when I return, I’ll purchase the handmade book. In the meantime, I own a paperback copy.

I absolutely adore one of their dimunitive books containing only one prayer. It has a place on my altar. Sacred to me, its message touches something deep inside. Whenever I read it, I’m uplifted as much as I want to cry.

Magic for a Long Life*

I’ve come with roses, with lilies, with carnations, with chamomile.

Lend me your ten masks so my years within the corral will grow longer.

My wayhel is suffering in the mountains.**

My animal soul has fallen off the hill.

She’s at the end of the rope, at the last link in the chain.

Lend me your ten toes, your ten fingers.

To guide my wayhel back into her tiger cave.

Back in the green cave where my Spirit lives.

Lift her up with a cloth that smells of roses.

With a rose, lift me up.

Lay me down in the shade of the vine.

Elder Brother who feeds the Souls:

Guardian of the Corral:

Spin around in a circle,

Turn around in a square.

Don’t let the tiger out,

The wolf, the coyote, the fox, the weasel.

I’ve brought pigeon stones for the hand and the foot

Of She Who Sees From Far Away Through Dreams.

Make my day longer with the sweat of your legs,

Your hands that glow green as precious jade,

Carry me, embrace me and my tiger, and my jaguar.

This is all I will bother you with in the name of the flowers.

Keep my animal alive for many years

In the pages of the Book, in its letters, in its paintings,

On the whole Surface of the Earth.

Atlas Obscura just published an article on the collective. For more background and photos than I’ve offered, do read it. It brought back to me the sheer magic of the place, the beauty of Taller Leñateros’ mission, and its fragility.

* I attempted to contact Ambar Past to gain permission to use the prayer in its entirety, since to segment it with just a few words would do it a disservice. I have been unable to reach her over time. I was advised that Ambar had withdrawn from the world and is now living in a monastery in Nepal. The suggestion came from a friend of hers to use the prayer listing the Maya woman whose version it is, there being other similar versions in the villages. I intend respect and hope to have done it justice.

**Wayhel is a Tzotzil Maya word meaning animal companion. In the words of Ambar Past, “…associated with shamanism, the portals of the Underworld, communication with the gods and the dead. The wayhel accompanies its alter ego from the moment it is born…” If one suffers, the other suffers. If one thrives, the other thrives.