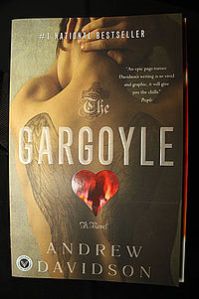 An absolutely engrossing and complex novel about a man living a depraved lifestyle until a serious car accident intervenes. Burnt over most of his body and terribly deformed, he undergoes the process of healing forced upon him by medical science. He wants nothing more than to end his life and sets out planning the suicide he would undertake once released from the care unit. In the course of treatments he meets Marianne, a beautiful sculptor who had slipped out of the psychiatric ward and showed up in his room. She claims they were lovers in medieval Germany when she was a nun scribe at the famed Engelthal Abbey and he was a soldier who suffered a similar injury as he had in present times. Through her ministering, not only his body, but also his soul began to heal. The story weaves back and forth between present-day to the Middle Ages, Los Angeles, Germany and elsewhere building a powerful tale of love and intrigue.

Would that the story could end there. But Marianne had word from beyond the veil that her work was nearly done in the present. She was in a frenzied countdown to finish twenty-seven more gargoyles before leaving this plane. Overlay that with the main character’s struggle with the enticements of drug addiction. The reader will vacillate between hope and dread, the outcome being unpredictable.

For people fascinated with questions relating to the sometime blurred line between mysticism and mental illness, reincarnation, the process of healing and resiliency of the soul, I’m betting you will find The Gargoyle as compelling as I did. Points of medieval life and the mystics of Engelthal Abbey are well researched, an additional plus.  Be forewarned that the description of burn treatment and healing is quite graphic, and unless you’re in the medical profession may be too much for you. If you can get through it, as I did, then you’ll find yourself much more educated on the subject and holding even more compassion for anyone who has to go through such suffering.

This is Andrew Davidson’s debut novel and he has well proven himself already. I am very much awaiting his next work. Available on Amazon and elsewhere.