In October 2012, I was visiting friends in Lafayette, Louisiana—Cajun Country—and fell in love with the area. My time there was made that much more interesting by meeting Becca Begnaud who is a traiteur, a Cajun prayer healer. I was invited to interview her for The Lifepath Dialogues during a program of hers. To me, the outcome was fascinating. We cover a lot of ground. Listen to Becca as she talks about what it means to be a traiteur, Cajun culture and challenges on the path as a healer. It’s worth 38 minutes of your time. 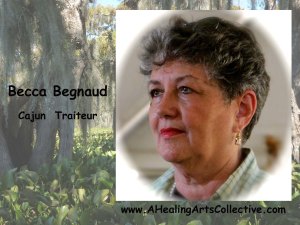 Interview on You Tube.

I will be returning to Lafayette shortly. Becca will be sponsoring my work for her Healing Arts Collective. You can find the details of the November 15 talk Timeless Pathways for Today’s Spirit Keepers and November 16 workshop Asking the Answer in this downloadable flyer. I’ll also be giving a talk in Baton Rouge on November 14 at The Red Shoes, a center for personal and spiritual growth. I’m very much looking forward to returning to this area, rich in so many ways.

Jessica Prentice is a chef and food activist in the San Francisco Bay area who is an avid proponent for locally grown foods. In other words, she urges us toward tradition. Full Moon Feast is a book about food and more with stories from Indigenous cultures of appreciation for what nourishes. It also tells of challenges and confusion related to relationship with food. Jessica advocates for small farmers who choose to uphold commitment and passion toward their way of life. At the same time, she documents methods of modern food production that have lost their humanity and encourage disconnection from our food sources and each other.

The author calls us back to a more engaged, mindful way of nourishing ourselves by connecting us to what food once held—the circle of life. She grounds the meaning and timing of food selection by our own natural rhythms and the thirteen lunar cycles. This book comforts and takes back to our roots—easily forgotten in a fast food universe. And it’s full of tempting recipes like Salmon Cured with Maple and Juniper, Summer Berries with Lavender Créme Anglaise or Sourdough Cheese Herb Scones. If you allow it, Full Moon Feast will deepen your appreciation for the food in your life and cause you to start searching out locally grown produce as it did me. The book is available through Amazon and bookstores.

When Hopi Spirits Come to Life: Home Dance at Moenkopi

In July 2009 I was invited by Harold and Char Joseph to Home Dance, the first one in the Hopi village of Moenkopi in 50 years—a very historic event. It’s during this July dance ritual that the Katsina spirits are ushered back to the San Francisco Peaks, the mountain range north of Flagstaff, Arizona, where they live until their return to Hopi in February of each year.*

A friend and I arrived at Moenkopi village outside Tuba City just before dawn. Harold was already leaving home. Moenkopi being Char’s home village, Harold acted as a helper. Normally Harold would have been at Second Mesa’s Shungopavi, already a long time in the kiva, a subterranean chamber reserved for religious rituals, engaged in ceremony in his home village. But this time being quite special he was lending a hand the way relatives do.

The previous night we’d ventured down to the plaza with other family members, carrying chairs, staking out a place in one of several rows already formed. The dirt plaza was long and narrow, enclosed by the original stone homes dating back to the 1870s. I felt like I’d stepped back to another era.

That early morning we sat at the edge of the village with others who had gathered, high on the bluff overlooking the lush cornfields below, a sharp contrast to the red rock cliffs surrounding them. I only discovered later that we actually perched on a kiva. An elder came and asked everyone to move. He slid the wood covering over to reveal its secret and climbed down.

We waited, slightly chilled by the light wind. Glancing around me, some of the people were in special dress, the women in beautiful shawls, and a few young girls wore the traditional hairstyle with fluted buns over each ear. There was a low buzz of conversation and greetings. Everyone waited patiently for the sunlight to hit the cornfields below. A number of pick-up trucks were parked to the side of the fields. In my mind, I converted them to horses. A sound was on the breeze that led me into another time and dimension.

At first it was faint but then it grew, rising up as though from the bowels of the earth. A chant that rose and fell, coming from an area of trees near the field. Those around me went quiet in anticipation, eyes glued, fingers pointing. And finally when the light hit the field just so, Katsinam emerged from the copse forming a single line as they began the slow walk up to the village, carrying cornstalks. It seemed like the line had no end. Finally, all Katsinam came into full view from the woods. They numbered 130, give or take.

As we shifted to our seats at the far end of the plaza, Katsinam poured in one-by-one, forming an ellipsis, continuing the chant, making the small repetitive movements that created the dance, virtually right in front of us. The sound of bells and rattles, strapped to each knee, accompanied each step and joined the drone of their voices. Even though sun now heated the air, I got chicken skin.

They gave cornstalks, a symbol of prosperity, to those watching and gifts of fruit and piki, a paper-thin rolled tortilla made from blue corn. The dancing continued. Then it was time for the first round to end. And the Kachinam left the plaza to be sequestered again. They performed at great sacrifice, foregoing food and water in the blistering sun until much later in the day.

But it was now time for the rest of the village to eat. We returned to the Joseph home and feasted on hominy stew and drank strong coffee. When the phone rang, I’d hear them tell the person on the other end, “Come eat!” One of the family members told me, “This is the Hopi way!” Indeed it was. As people poured through the door, they were directed to grab a plate and ladle a good helping.

The Katsinam were to dance eight times that day. Between dances families and friends gathered at homes, many from out of town it being such a special time. Each time food was shared. We were encouraged to nap in the heat of the day—which I did, in a room full of people that felt like family to me even though it was my first time meeting some of them.

How was it that this was the first Home Dance in Moenkopi in 50 years? Many Hopi people have fallen away from the traditions, and the necessary initiations haven’t occurred to support the ceremonies. Shungopavi is the only village that keeps the complete cycle of religious ceremonies unbroken, the elders staunch.

A strong older woman instigated the 2009 Home Dance. Her son was marrying. She wanted to show off the wedding robes of her son’s bride as part of the ritual. Other brides would be able to do the same. Through her commitment the village re-engaged, others coming from elsewhere to support the ceremony, accounting for the large number of Katsinam, a profound example of what determination can do—and for good cause. Traditions take us back to where we began. For my part, an appreciative outsider greatly stirred by the experience, I hope the Home Dance continues in Moenkopi. At this writing, it’s recurred once. That was in 2011.

***
*A Katsina is a spirit being of the Pueblo Tribes, an invisible natural force that can be called upon to bestow protection and wellbeing for the village. Katsinam is the plural form. In the Hopi tradition there are approximately 400 different Katsinam, each one different and having a separate purpose. For days prior to religious dances, initiated males enter the kiva and undertake long rituals. When they emerge from the kiva to dance, they are no longer who they were when they entered. Instead, they are the embodiment of these powerful spirit beings, dancing in human form, on the earth.
***
I will sponsor Spiritual Travel to Hopi: Sacred Guardians of the World during March 6-9, 2014. This is a rare chance to experience Hopi Spirit Keepers in their homes, hear the ancient stories, visit sacred sites, learn about medicine ways and attend the Night Dances, all that weaves the very identity of the Hopi people as guardians of the world. Only recently is it now possible to be invited to such an experience. It’s only through relationships I’ve developed over a number of years that this program has been born. Join us for this adventure of the spirit! Early registration discount ends November 6. A portion of tuition is tax-deductible to support Kenosis Spirit Keepers’ projects preserving Native traditions.