Book Review: A Tale for the Time Being

I think some stories are best read aloud. For me, this was one of them. I came to this conclusion before I knew that the author herself reads all her work aloud as she writes chapter to chapter. And she was the narrator here. Who better to know how to make her point? After the fact I also learned that author Ruth Ozeki is a Zen Buddhist priest. Then so much of the knowledge dropped in unexpectedly, almost casually, made sense if it has its place in the everyday underpinnings of someone’s life.

I count the coincidence lucky. I’ve just started listening to audio books. I wouldn’t have used the right inflection for the Japanese names or words in my mind. I might have glossed over them. But also because there were things inserted softly that caused me to stop and listen. There’s another layer here, I’d thought. I rewound and took it in again. 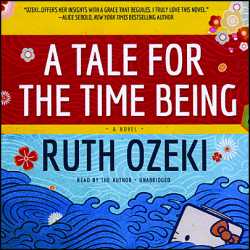 There was the clever double entendre: A Tale for the Time Being. We’re all Time Beings for the time being. And it’s a novel that involves time, how we experience it, the ways it warps. But you don’t realize it until you’re well into the novel. It’s subtle until firmly anchored.

A Japanese American novelist with writer’s block named Ruth walked the beach near her home, a little populated island off British Columbia, and found a carefully wrapped, albeit battered, package washed up on the shore. It wasn’t long after the 2011 tsunami and the resulting meltdowns at the Fukushima nuclear power plant.  It contained a Hello Kitty lunchbox, the diary of a conflicted Japanese American teenager living in Tokyo named Nao (Now?) and more. That is the launching point that draws us into the shame-suicide culture of Japan, the suffering of a “living ghost”, and the darker underbelly of Tokyo. If the book had only been these things, I probably would have quit after the first chapter or so⏤stopped short from finding out what it was really about.

I would have missed Jiko, Nao’s 104-year-old great-grandmother, a Buddhist nun  who peppered her conversations with koans drawn from The Shōbōgenzō written by Japanese Zen Master Dōgen. And how Ruth lost the experience of her own now, the more obsessed she became with Nao’s, and began to realize she was “playing origami with time.” Or the strange phenomenon she experienced of changing places with the young girl, populating her dreams, and finding them much the same. Or Ruth’s disclosure of another weird instance, which validated my own, when being so immersed in writing a story that, upon waking the next morning and opening the computer, she found herself wondering who had written the words…

This is a novel about living in the midst of contrast in this modern world, the time of our being and the choices we make, along with a real indoctrination to Japanese culture. I have to end with this because it’s such a great quote:

The ancient Greeks believed when you read out loud, it’s actually the dead borrowing your tongue in order to speak again.

Available in print, e-book and audiobook from the public library, Amazon and elsewhere.

Unearthing of the One Tribe

Early morning as it was drawing to a close, I reflected on our journey in the lowlands and highlands of Chiapas. I don’t quite know how to describe what I was feeling in this time of unearthing. Some mixture of great gratitude and overwhelm. Not overwhelm in the way I may sometimes feel it at home when I have too much to juggle at once. Rather it was the sense of overwhelm that comes when so much has happened of a sacred nature. You can bathe in it…even though the deeper meaning isn’t yet realized. But my mind’s attempts arising nonetheless.

Words broke through in staccato—bullet points. My hand flew to jot them down. Each one came illustrated with examples from the Maya people themselves.

The religious officials in the Chiapas highlands carry cargo, a term to describe the responsibilities they take on to maintain their traditions, to care for the saints, to make sure the processionals occur as they have for many hundreds of years. And house the saints well between times so they will receive the prayers of believers. Carrying cargo is a burden taken on for the sake of the community, done through community. Tasks are divided and shift to others from year to year. No one person can do it all. The strain is too great on family finances and time away from the fields. These are not paid positions. They do it because, if they didn’t, a way of life that connects all things would otherwise disappear into the ether from which it emerged.*

Don Antonio signaling the start of the balché ceremony.

For some, the sacrifice is ongoing. I always think of Don Antonio Martinez, the last Lacandón Maya Elder still holding the rituals of his people, faithfully feeding the gods, laying down the prayers to create balance in their rainforest home. His is not an easy life when others have turned away to foreign religions or the influx of material things, when he is nastily pressured by converts to give it all up. I’m guessing he hangs on because he recognizes his soul would otherwise suffer, and he cannot find it within himself to abandon the gods.

For me, a clear measure of an authentic spiritual leader or healer is humility. If their ego isn’t making pronouncements, they can approach their work with compassion. Connection to the person in front of them, and their community, is genuine.

Don Xun Calixto, Tzotzil Maya of San Juan Chamula, is a profound example of that for me. Over and over, I’ve witnessed his ability to put his fingers on a person’s wrist, someone he’s never met before, and listen to their blood. Then with gentle words tell them the exact nature of what they need to let go in order to heal, his words confirmed when his patient bursts into tears as he holds them in a comforting hug. The care and precision in which he lays the altar, and how he sinks to his knees and utters the prayers to carry the healing. Or the relief a patient displays when he tells them they can put fears aside because they’ve already overcome their trial. 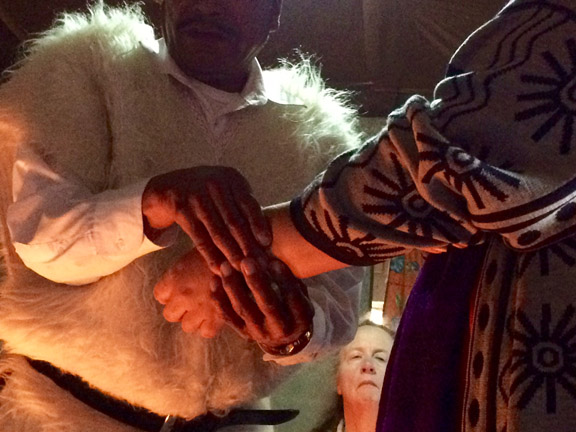 Don Xun listening to the blood.

Today we don’t think of political leaders having humility, the opposite so often true. In ancient times though, Maya kings and queens were spiritual leaders and protectors. Indeed, they were seen as gods incarnate, walking among the people, making personal sacrifices. Humility displayed itself in the bloodletting rituals they undertook upon their own person. For the kings, thrusting a stingray spine through the penis; for the queens, through the tongue. Their blood dripped onto a paper then burned, taking the blood prayers for good crops to the heavens.

In the Popol Vuh there is explicit counseling against narcissism and pompous behavior. Seven Macaw, a demon parading as a god, claimed to be the sun and the moon. He terrorized the people and puffed himself up with jewels and arrogant proclamations. In doing so, he gained the attention of the Hero Twins, Hunahpu and Xbalanque, who noted his evil and summarily took him out.**

Depending on the nature of an affliction the people consult different types of healers. An example would be Doña Maria, a curandera who attended us during this recent journey. Her prayers will cure an earache or get an innocent man out of jail. 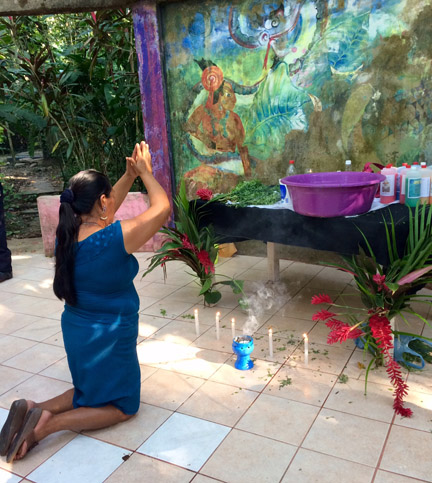 But when someone thinks the ailment involves the supernatural, particularly witchcraft, they will go to Don Xun. And if he diagnoses soul loss, he will be called upon to descend into the Underworld, through trance or dream, with a dire mission. Not an undertaking for the faint of heart, Don Xun must wrestle the person’s soul away from the Earth Lord. In this process his prayers return the patient to wholeness.*** 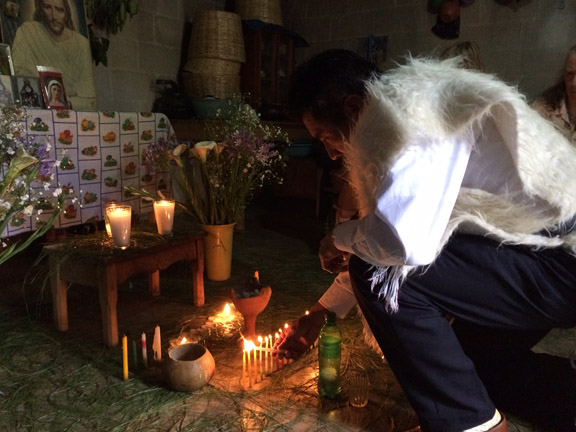 In the face of great adversity, I witness quiet persistence, strength and faith in the person of Don Antonio in the tiny village of Nahá.

Emerging from the 1990s genocide in Guatemala and Chiapas, the Maya have not been defeated. Particularly the Zapatista Movement in Chiapas is alive and well. Nonviolent marches protesting treatment by the Mexican government regularly occur. At the entrance of villages, signs proudly declare a people in resistance. While behind the scenes, Zapatistas are not merely complainers but have actively established their own Indigenous schools, clinics and pharmacies using traditional ways.

Throughout the Indigenous communities of Chiapas, I am consistently reminded of a way of life that integrates spirituality into everyday life…and the grounding that brings. As I’ve returned to my geographic home base in the US, I’m also reminded just how fragile that way of life is with the forces active to destroy. I am aware of the soul loss within this nation ⏤ including my own. And the need to pull together, so that we do not feel as though we are merely one…but the One Tribe.

* Outward appearances may confuse outsiders into thinking Catholicism is being practiced in the Maya highlands. This is not the case. Instead the saints have been converted. Each one carries the meaning and stories the Indigenous people have given them, and the spirit of the forest permeates the church with trees (pine boughs), mist (copal incense) and fireflies (a multitude of candles).

**The Popl Vuh is the K’iche’ Maya creation story and historical references originally documented in Maya hieroglyphics, transcribed in the 16th century.

***One of the worst curses perpetrated upon someone is due to envy. One person seeks to usurp what another has and, through witchcraft, captures the soul and offers it to the Earth Lord. In the Tzoltil Maya religion, the Earth Lord rules the Underworld and owns all the natural resources. The Earth Lord, represented as a greedy ladino with a cowboy hat sitting on a bull, may grudgingly provide, but may also take away on a whim. In Chiapas when a shaman of Don Xun Calixto’s stature engages with the Earth Lord it is not done through hallucinogens or alcohol but, as described, through trance, dreams and prayer. These undertakings are every bit as real as anything in the material world involving battles and danger.

All images in this article ©2017 Carla Woody. All rights reserved.