In Memoriam: Doña Panchita of Palenque

There are people who belong to a place in such a way that they become imbued with the very energy resident there. It permeates who they are…and they’re generous with it. Over the years I’ve returned over and over to certain areas that are dear to my heart. In particular ways, I live vicariously through those I’ve known at some depth who have consistently played a part during special journeys. They ground me in the land. When I see them through the years, they reinforce all my experiences by virtue of their physicality. When suddenly that person is no longer there, it leaves a void and a piece of me goes with them.

Doña Panchita, curandera of Palenque, was one of those people. A couple of weeks ago, I received the sad news that she had recently passed. Annually during my Maya spiritual travel program in Chiapas, we would see Doña Panchita for an individual limpia, a clearing session. 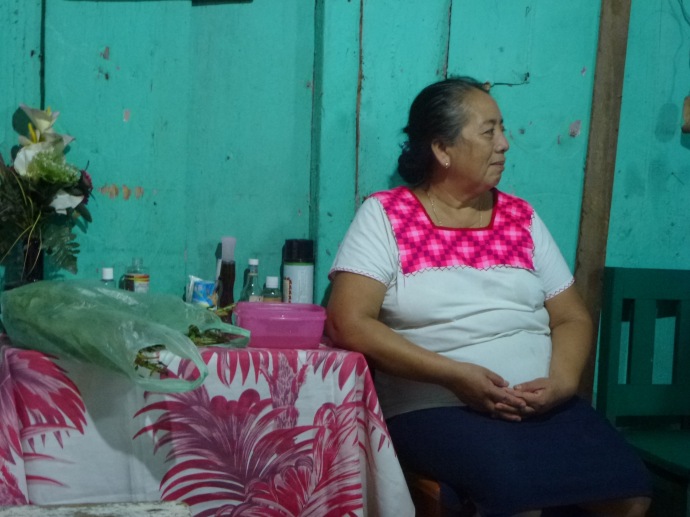 We would go to her home just off the main street running through the town of Palenque and take our places in her waiting room, which doubled as a storage and laundry room. Sometimes kittens would scamper in as the kitchen and rest of the living quarters were through an open doorway on the right. A curtained door next to the washing machine led to the tiny room where she saw patients. We weren’t the only ones waiting. Locals often sat patiently, too. You see, Doña Panchita was respected in Palenque as a bona fide healer. She served her community.

Working through prayer and clearing methods, she alleviated imbalances and dissipated blockages in the emotional and physical bodies, and dispensed with spiritual afflictions. She sent outside interferences packing, such as envy from others, etheric cording that drains, a hex from a sorcerer or any other detrimental attachments.

Doña Panchita was not given to talking about herself or how she worked. She was humble. In my experience over the years, she was no-nonsense and wanted to get down to business. I imagine this was especially so because she would already have had a full day from early morning working as a maid in a local hotel. That’s before she would begin seeing anyone in her waiting room. But one time her husband slipped in and sat down with us. He disclosed that the spirits of the house, or the small plot of land where it sat, had made their connections with his wife many years ago, and she worked through them.

She was Catholic, deeply religious. Along an entire wall from tabletop to ceiling, was an altar with religious statues and accoutrements of various sizes. She favored Mary. Framed pictures of saints also hung on the wall. I remember being overwhelmed by it the first time I entered the room. Other than the altar there were few furnishings. Mainly two chairs—one for her and one for her patient—and a small table to hold the herbs and other things she used.

I remember the first limpia with Doña Panchita maybe ten years ago. She didn’t know me, and I didn’t say anything about myself except whatever she may have gleaned from my request of her, something fairly benign. I closed my eyes and heard her praying under her breath then felt her brushing my body, head to toe, with a branch of holy basil. Once she was done, I opened my eyes. I remember feeling a bit spacey and had glanced over at the altar, which seemed to have come alive. She stood in front of me pointing to an ornate cross around her neck and told me in no uncertain terms that I must immediately buy La Cruz de Caravaca and wear it, that I needed to protect myself because of the work I do. She then called to a young woman, probably a granddaughter, and dictated a prescription instructing me to, once I returned home, bathe in the infused liquid she gave me and purchase some other things to add to the bath. I did both.

During my 2011 session, I told Doña Panchita that I had been feeling off for some time. Nothing seemed to be going well. At every turn there was a roadblock. Sometimes it was worse than others. It didn’t feel like it was something of mine generating the problems. I always look inside myself first to evaluate.

What I had not told her was how uncomfortable I also was in my own home as though I was unwelcome. I often felt on edge. I would frequently wake up in the middle of the night on high alert as though there was an intruder in the house. Sometimes there would be popping noises or the bureau in my bedroom would crack loudly like it was splintering.

I had barely stopped talking when she took hold of my head on either side and began shaking it, making guttural sounds, growling, into the crown of my head. Then praying fervently and whacking me with a water-drenched holy basil branch. Understand this was rough treatment coming from her. She was normally quite gentle. When there was a lull, I opened my eyes to slits just in time to see her holding scissors a foot away from my body. As she began to slice through the air, I can only say it was like floodgates released⎯and whatever had been there…vacated. I felt immediate release…light energy…and extreme relief.

When she was done, she took an egg from the table and cracked it into a glass of water. After a few moments, she showed me the glass, and based on how the egg appeared, that all was well. I don’t know how to read such things. But I certainly took her word for it. I’ll never know the cause of all those troubles and didn’t ask her.

Before I stood, she asked me to open my hands and placed a white flower across my palms. She closed my hands together with her own and said, “For your work.” I was so very touched by her blessing.

After that journey when I walked through my front door, everything looked brighter in color and had a sparkle to it. Really. Whereas, for years I’d been experiencing the things I’d mentioned, from that time forward all has been clear. No more cracking furniture. No more high alert. I am home.

I hold much gratitude toward Doña Panchita of Palenque. I know others do, too. She blessed many with her attention, kindness and skill. She was the real deal and is missed.

Spiritual Travel to Peru: The Heart of the Andes

Spiritual Travel to Peru: The Heart of the Andes
September 2-12, 2018
An Intimate Journey Honoring the Peoples
of the Eagle and Condor.

Co-sponsored by Kenosis and Kenosis Spirit Keepers.
A portion of tuition tax-deductible.

We are pleased to announce our 2018 Spiritual Travel Program to Peru, an immersion experience in sacred ways linking the Indigenous peoples of the Andes and High Jungle.

Through teachings, ceremonies and prayers we engage beyond the material plane and explore other dimensions of ourselves. Quechua and Q’ero paq’os — traditional Wisdom Keepers and mystics — guide us to encounter learnings that usher us into the world of the Andes, an alternate reality of life-affirming choices. Through an Altomisayoq, the highest level of Andean priest-mystic, experience the presence of the Apus⎯mountain spirits⎯and directly receive their guidance. Then encounter condors, representatives of the Upper World, in their natural habitat riding the air currents in front of us.

Transitioning through the Cloud Forest, we float down the Alto Madre de Dios — High Mother of God — deep into the rainforest to the pristine, wild surroundings of the Manu Biosphere Reserve where we sequester. There we come to engage with Huachipaeri-Matsigenka teachings and medicine ways of the jungle with Elder Don Alberto Manqueriapa. It’s said he carries the rainforest in his soul.

To register and for complete information including  detailed itinerary, guides, tuition and travelers’ stories, go here.

Sponsored Guest: Through your tuition and private donations we are sponsoring a Native American Wisdom Keeper (yet TBD) who will travel with us throughout to share traditions with relations.

This is a journey of ayni — sacred reciprocity. We sit in ceremony of all these traditions, become an allyu — spiritual community — honoring all that sustains the planet and our own well-being. We come together with blessings, prayers and share the daily activities of all pilgrims.

Registration is limited to maintain the intimate nature and has filled quickly in the past. A portion of tuition is tax-deductible to help preserve continuity of Indigenous wisdom traditions through the support programs of Kenosis Spirit Keepers, the nonprofit extension of Kenosis.