How to Make Your Characters Come to Life

One of the biggest challenges fiction writers have is to breathe life into the characters of their stories, to make them believable. This is particularly true if your book is character-driven. You want readers to connect with the story and those in it, to love or hate them. A reader of my latest book Portals to the Vision Serpent wrote to say how she couldn’t stand Sybilla, who features prominently in the novel—until she really understood her. Then she had great empathy. Even if the book is plot-driven, you want the characters’ actions to make some level of sense from their standpoint.

We all have a specialized, individual template that we live by. Here’s a quick review on how that happens. Your brain codes experiences you have. The original coding usually takes place early in life. The coding becomes your perceptions, which translates to the beliefs you have about yourself, others, the world in general, and what’s possible. This template also becomes the filter through which you experience your life. You develop strategies for thinking and living that further reinforce the original beliefs—those that support and those that get in your way. When something significant happens to disrupt the old beliefs, things can shift dramatically.

Your characters are no different. Here’s a way to uncover their templates by “stepping into” different perspectives.

By using a method like this, you also invite your reader to tag along through your writing, to undergo the same discovery and identify with different characters playing out the human condition, no different than the rest of us. We are all who we are based upon where we’ve been. But when something of great enough significance interjects itself triggering a change in one character…it also affects the others in close proximity. That’s how things get shaken up; the story becomes so much more interesting; the characters can grow in various ways.

Of course, you can use what I’ve written here as a guideline to explore aspects of your own life, not just writing. This is a brief primer toward self-discovery and relationship dynamics that I use with clients as a springboard for transformation. I’ve adapted the content of this post from my mentoring program Navigating Your Lifepath, which guides folks on how to live through their deeply held values—and thrive.

What are ways you can imagine exploring perspectives would be useful to you? Let me know your ideas or experiences in the comments below.

The Wild Parrots of Telegraph Hill

Before I watched this documentary I thought it might be an interesting piece on wild parrots in an urban setting. It’s that but much more. Mark Bittner is a homeless man who began feeding the wild parrot flock around Telegraph Hill in San Francisco. Over time he was able to develop a relationship with the birds and cared for those who were injured or sick. He brought them into the small apartment where he was squatting until they were well, giving them names. Through the filmmaker’s lens, we’re able to experience their separate personalities. There’s Mingus, a cherry head, who loves to dance to the blues. And Connor with his quiet regal manner, a blue-crowned parrot in a flock of cherry heads, too many others to name here. I don’t want to give away too much.

At the heart of the story is how Mark found inner peace and his place in the world through service to the parrots. There may be a message for many of us in this poignant and inspiring film.

View short clips on You Tube. Available via Netflix, Amazon and elsewhere.

Worthy of What Really Matters

I particularly wanted to post this note on Independence Day, our national celebration, as a call for remembrance. The Prescott, Arizona area—my home community—has been devastated by loss. A week ago the Granite Mountain Hotshots successfully contained the Doce Fire without loss to human or domestic animal lives or homes. Just a few days later on Sunday, June 30, nineteen firefighters from this elite team lost their own lives fighting the Yarnell Hill Fire. There are no words to express the horror and deep sadness that I feel, and that collectively runs through this spot on the map. No pat sentiments about God’s plan work in these cases where such things happen. And I recognize that they do occur all over the world. 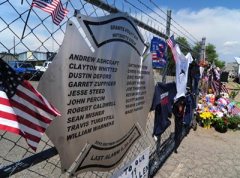 I am so heartened to see how the community has pulled together to support the evacuees from Yarnell, many whom have lost their homes,  and to raise funds for the families of these courageous firefighters.

When Andrew Johnson-Schmit, a well-known community arts organizer here, posted this note on his Facebook page, I had to share it  on mine as I believe the same: I am going to remember tonight the next time I despair about this community getting its act together. When I wonder if we really all just can’t get along. When I am tempted to think the trolls in the comment section of Dcourier.com are really indicative of Everybody’s Hometown. Our Hotshots didn’t stop to squabble about whose houses they were going to save, if they’d lived there long enough to qualify as local, if they spoke English well enough, if they voted for the right party’s views, they defended our community and died standing in the way of devastation, between the fire and their neighbors. We can be a community worthy of that kind of sacrifice. I know we can.

These fires and the resulting tragedy put memories of an anxiety-ridden time fully back in my face, as well as the gratitude that came of it. In 2002 I lived up in Ponderosa Park, a forested community just outside Prescott where the Indian Fire started at a campground on the other end of the road. I’d been staying in the tiny guest cottage of a friend with my three cats while my present home was being built, all things but those I deemed most important in storage.

I was in my Prescott office when I received a call from a long-time participant in my groups telling me about the fire racing toward the cottage. I fairly flew toward home—but the police wouldn’t let me past the roadblock. All I could think about was getting my cats out. We’d been through so much together, I couldn’t stand the thought of losing them that way. Then I remembered that my friend Marilyn Markham Petrich likely knew the back roads through the forest to get me there. She never hesitated. This whole event had a profound effect on me to the point that I wrote about it in my 2004 book Standing Stark.

…Returning along the same road, we came to a high point. I turned and looked back to see a ridge of flames leaping into the air and billowing smoke filling the sky. Watching the news after getting to her house, we saw that, blessedly for the residents of the little area where I stayed, the strong winds had chanced to shift in the opposite direction. Those homes were saved, but the forest and another housing area closer to town were not so fortunate…Then a miracle happened. The winds that had been wildly spreading the fire died down. In the next days we had some rain. Not a lot, but enough to slow things down. Within a few days the fire was contained, just blocks from the downtown area.

…That first night as I was settling down to sleep in my new temporary quarters at Marilyn’s home, with the cats plastered to my side, I was extraordinarily grateful that I was not one of those who suffered a personal loss. I also felt soundly blessed that I had such a friend who was willing to rush madly with me into a potentially dangerous situation without any reservations. Everyone should be so fortunate.

But I was also aware that the entire town had shared in a deep soul-searching as to what really matters. Indeed, stories filled the newspaper and conversations for weeks. Handmade signs in shop fronts and driveways were evident proclaiming gratitude to the Hotshots who had risked their lives to help us. That was before people seemed to forget the tragedy and returned to their normal lives.

However, I was left again with a real understanding of how transient everything is, how what we think permanent isn’t…

This time let’s not forget what is truly precious.

To echo what Andrew said: We can keep in our hearts what really matters. We can be worthy of the sacrifices others make for us. We can pass on the same support to others. I know we can.

I’d love to hear your thoughts on what really matters and how you keep it in the forefront. Please comment below.