Chauvet Cave is about five hours to the east from where I was during June in the Dordogne region, the particular section called the Périgord Noir. This is where I was so fortunate to experience two caves with very limited access, Les Combarelles and Font-de-Gaume, and was simply overcome. A couple of people, whose names have slipped my memory, then suggested I see the documentary The Cave of Forgotten Dreams done by Werner Herzog on the Chauvet Cave. If any who directed me are reading this review, I thank you profusely.

Herzog managed to produce a film that gives a visceral sense of another such hallowed space. Contained in the Chauvet site, home to cave bears, also rest antiquities – indeed lineage bearers, all that remains from the perceptions and sacred expressions of Paleolithic artists.

The team allowed to enter was quite small, some researchers and a few filmmakers, and only for limited times. They could touch nothing of the interior, walking on a carefully protected passageway alone. Remembering how overwhelmed I was when entering 10,000-year-old sites, I could only imagine the condensed energy of one 20,000 years older. One young scientist was interviewed and spoke of how, after working in the cave for five days straight, he found it so powerful he had to take a break to absorb it all. 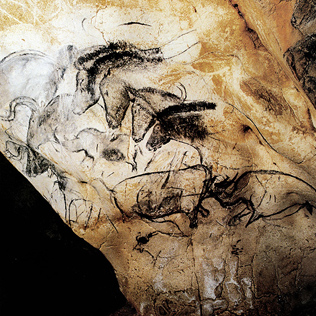 There were so many similarities to my own visit to such sites in the Périgord Noir, although mine were but a snippet. The awe as to the sophisticated renderings and talent. How they translated movement and power of their subjects. How the very place seemed alive. This was so especially in the sweeping scene of images filmed purposefully in silence. I will confess it brought tears to my eyes.

Remember this is narrative art. The narrator pointed out two sets of lions. In one, the obviously male lion was courting a female who was not ready to accept his advances. She growled at him. In the other, the female had agreed, shown as snuggling the side of the male.

I highly recommend this film for those who wish to gain a new respect and appreciation of our ancient ancestors, and for art enthusiasts who want to trace influences on much later, modern artists.

As an aside, I noted in research elsewhere that when the age of the Chauvet Cave rock art came out, it was contested by those who insisted on adhering to their outdated, ego-entrenched conjectures. This also happened with the Altamira cave in northern Spain. Altamira itself was found by a local hunter in 1868. He told Marcelino Sanz de Sautola, an amateur archeologist who owned the land. In 1879, he began excavation, but it was his young daughter Maria who actually discovered the cave paintings. When Sanz de Sautola attempted to take the findings public, suggesting the art was 10,000 years old, he was declared a fraud and the paintings fake by those of the same ilk mentioned above, plus the Catholic Church. He suffered the effects of public humiliation until his death. Posthumously some twenty years later, he was recognized for his achievements, the age of Altamara cave art not 10,000 but 35,000 years old. An account is given in the little known film Finding Altamira, which can be viewed on Netflix.

The Cave of Forgotten Dreams is available on Netflix and has also been uploaded by viewers onto You Tube. One hour, 35 minutes.

Maybe you’ve been in the same place or still are. I started experiencing a sense of generalized, underlying dread. Like waiting for the other shoe to drop. A kind of existential angst…over which it felt like I had no control. For months, I awoke in the morning and steeled myself to face the day. What new outrage would be presented? How do I navigate the low-level grief – or overwhelming waves of sadness and righteous anger – and be able to function reasonably in my everyday life? My energy was sapped by some stealthy foe.

Then I realized I’d started to grow numb to what occurred…and that’s not healthy. That would only indicate that it was becoming submerged to the point of becoming the norm.

That isn’t who I am or how I choose to live my life. I can pinpoint exactly when it began – and it turns out I haven’t been alone.

Oh, I’ve been through the intensity of the Dark Night of the Soul, thrashing around in the invisible landscape, and came out the other side. You can read about those years in my book Standing Stark. That’s not what this is about. Nor is it about all the times I stood at the threshold – restless for change – sensing, but not seeing, the next realignment of my life. Those times I actively chose. Those were personal. As much as any of us have any control whatsoever, I felt as though I was the rider of that horse who, in partnership, would take me where I was meant to go.

After the many months, I finally determined I’d relinquished the reins and wasn’t on the horse at all. In shock, I’d allowed myself to be thrown off by a dangerous runaway, out of control, underbelly completely visible.

Here’s what makes this different: This challenge was delivered at the meta level. It affects the world community and our collective future.

In June, I was in France for the month, the last leg two nights in Toulouse. A little rest before the long flight home. I was walking along the river when I glanced back toward the Pont Neuf bridge and saw the most curious thing. There at the edge of the circular opening between the piers closest to this side of the bridge sat a figure, its legs dangling over the edge. A red devil. At first I thought it was someone dressed in costume, maybe a street performer. I snapped a photo and posted it on my Facebook timeline, jokingly labeling it The Entrance to the Underworld. A closer look – and the fact it hadn’t moved the next day – determined it to be a fixture.

Overnight I’d done some research and learned of Notre Dame de la Daurade, less than ten minutes from my hotel, that contained a Black Madonna. Excitedly, I struck out the next day. I couldn’t understand why I hadn’t noticed the church previously when it was located along the river, quite close to Pont Neuf. Then I saw why. It was a blocky building, looking more like a Masonic Temple or maybe part of the art school whose walls adjoined it. Plus, it was partially hidden by fences and restoration equipment. But the front door was open. So I entered.

The inside walls were shrouded in dirty draping, dust everywhere, building materials scattered on the floor. No pews. Nothing really. Not what I expected. The few workmen I saw paid me no mind. It took me a minute to get my bearings. I knew the Black Madonna was supposed to be in the southern transept and picked my way through. I was about to go through a small opening in the drapery that segmented the back part when a man, probably the one in charge, told me I couldn’t be there. I attempted to talk him into it, “Even for a moment?” But he was firm.

Disappointed, I turned to go. I was nearly out the front door when I felt a strong pull coming from my right. I paused to look around to see if the coast was clear…then followed the energy. That’s where I found her. She was stuffed into a dark niche, stripped of her finery, behind tall iron bars, a padlock barring entrance. It seemed so disrespectful. A couple of candles burned just outside. I stayed for a long time. If anyone saw me, they let me be.

Something bothered me. The only things of significance I took away from Toulouse were that devil – on which I could find no information online – and the Black Madonna. It just didn’t sit right with me. So I sat with it for several days through the first few days I was home. It hit me.

The devil guarding the gate. The Black Madonna and child locked up. Held hostage. Renovation.

I’m one for metaphors. When I’m involved in deep spiritual inquiry, that’s where my mind tends to go. This, coupled with all the environmental upheavals across the planet, brought me to focus. It’s not like I didn’t know this at some level. Now it’s no longer hidden. I’ve got it.

This is shadow work. We’re all being called to it: collectively and individually.

We’re being asked to consider:

I’m deep in the thick of it. Sorting. I don’t have any answers yet. Just the questions that have been there all along now made plain and visible.

For me, insights come in silence and solitude – in the early morning when all is still and little is fighting for my attention – still fresh from sleep where so much is recycled and put to bed. The way through reveals itself in the aftermath of meditation, in the process of writing or creating artwork, and during the method I use to clear my brain.

Whatever answers finally come are mine and may not be yours. But my deepest hope is that all will hold the core values that nurture the collective. In the meantime, these things I write of here are helping me fine-tune the path I take.