I stumbled across a brief note on Olive Oatman researching something else, and read The Blue Tatoo to learn the full history relating to what occurred from 1850 and continuing on well beyond her death in 1903.  Olive Oatman’s name became inseparably intertwined with that of the Mojave and Yavapai Indians, a tragic story for all on a number of levels. The complete truth remains elusive. It varied significantly depending on who told the story and when…even becoming an episode of Death Valley Days, the old TV show. The Blue Tattoo may well be the most accurate and comprehensive account, the author Margot Mifflin having depended on historical documents, family diaries, letters and interviews.

In 1850 a large group of Mormons left Independence, Missouri headed to the Southwest. Their numbers went through several splits as different factions sought to take over and redirect their destination. Until finally, the Oatmans—with seven children spread between the ages of 1 to 17 and mother pregnant—were the sole travelers in the Sonoran Desert on a 190-mile trail well known for its extreme desolation and danger to whites, frequently attacked by tribes living in the area. The father Royce Oatman, described in the book as a reckless piece of work, knowingly put his family’s lives at great risk. His actions had dire consequences.

About 100 miles from what is now Yuma, Arizona, the family was surprised by a small group said to be Yavapai Indians, often mistaken for Apaches. They asked for food. Royce refused, and the family was massacred with the exception of Olive, Mary Ann and Lorenzo, ages 14, 7 and 15, respectively. The Yavapai took Olive and Mary Ann, along with the family’s few cows and oxen. Lorenzo, who was severely beaten, had rolled down a ravine and was left for dead.

Thus began the unfolding of events detailed in The Blue Tattoo: the terrible year with the Yavapai, their trade sought by the Mojave, Olive’s assimilation into Mojave life over a 5-year period, her “rescue” and what transpired over the next decades. I won’t go into details and instead leave them for you to read.

But there are a few things I do want to say.

The author focuses on the fact that it would be highly unusual for the Yavapai to conduct such raids except on their traditional rivals the Pima and Maricopa. She puts it to the reason of late winter hardship made more desperate by drought. But cannot say why they chose to abduct the girls since they would be more mouths to feed in dire times. They were, however, mistreated, worked to the bone as servants and last in line to receive what food there was.

The Mojave were farmers who lived tucked away in a little traveled area near what today is Needles, California. They were kind to the girls and likely saved their lives. Olive’s traditionally tattooed chin was an indicator of her assimilation. They were made part of the tribal leader’s family and taken into their clan. When a surveying party headed by a Lt. Whipple came to the village over a several-day period and were made welcome, the girls did not make their presence known or try to approach the party to escape. Within a year though, due to rumors of a white girl living with the Mojave, a Quechan messenger from Fort Yuma came demanding Olive’s return upon threat of annihilation of the tribe.

Shortly after Olive’s arrival in Fort Yuma, she was taken under the wing of Royal Stratton, a Methodist minister, who exploited her for his own gain. He wrote a book, liberally changing the story, adding manufactured details meant to titillate. He set Olive up on the lecture circuit where she traveled for years. She became famous.

It reminded me very much of the same kind of travesty befalling the healer Santa Teresita of Cabora when she was deported from Mexico to the United States, and her many years’ exploitation by a so-called medical consortium.

I understand the terrible conflict Olive must have faced brought back into a society that held the prevailing message: The only good Indian is a dead one. Having now lost two families, she must have been wondering what story to tell at all: the one white society was salivating to hear or the truth. She contradicted herself frequently.

One of the many things that saddens me so about this tragic story is her betrayal of the Mojave people who were kind to her—when she told the version that they had enslaved her. Within a couple of years, they were removed from their villages, split and confined to two reservations: one near Parker, Arizona and the other to the Colorado River Indian Reservation near Needles. Their small numbers lessened.

Margot Mifflin cites, The Mojave homeland was literally wiped off the grid. Area maps printed after 1859 no longer identified the site of the Mohave villages; instead, the region, dubbed Fort Mojave, was distinguished by a military post…to protect westward bound emigrants from the Mojave Indians.

From the Yavapai-Prescott Tribe website: There are three primary groups of Yavapai existing today – they are located at Fort McDowell, Camp Verde and Prescott.

The Blue Tattoo is widely available in print, ebook and audiobook. I read a copy from my local library.

I’d just left the family-run hotel where I stay when in San Cristobál de las Casas headed to Na Bolom. I was paying particular attention to my feet due to the town’s notoriously deteriorating, uneven sidewalks with potholes aplenty. When I glanced up to make sure I was still on track, I saw a painted sign, hung over a doorway enclosed by a gate, of a Classic Maya in full regalia riding a bicycle. Its paint was peeling and had seen better days. A similar image and fanciful creatures were strung out along the adobe wall.

I crossed the street to peer into the courtyard. The long work tables lining the wall were filled with stacks of some kind of material – that I couldn’t readily identify – and wood block prints haphazardly hung on the wall. I didn’t see anyone around. It was just too intriguing. I opened the wooden gate and entered. I was fascinated by all the prints, more now visible on the inside wall, and saw a small room. It was stocked full of handmade books and journals, posters and postcards. I’m enamored of such hidden treasures.

I’d discovered Taller Leñateros. That was probably ten years ago. Since then, I stop by nearly every year when I’m in San Cris and purchase a book, postcard or poster. I have my own private collection of their jewels.

Mexican-American poet Ambar Past started this natural paper and bookmaking collective back in 1975. She’d been living among Tzotzil Maya women in the highland villages of Chiapas, Mexico and, with their permission, began to collect and translate their traditional prayers, spells and poetry, which had never been written down. Her efforts ultimately culminated in a truly unique illustrated book, Incantations: Songs, Spells and Images by Mayan Women. One time when I return, I’ll purchase the handmade book. In the meantime, I own a paperback copy.

I absolutely adore one of their dimunitive books containing only one prayer. It has a place on my altar. Sacred to me, its message touches something deep inside. Whenever I read it, I’m uplifted as much as I want to cry.

Magic for a Long Life*

I’ve come with roses, with lilies, with carnations, with chamomile.

Lend me your ten masks so my years within the corral will grow longer.

My wayhel is suffering in the mountains.**

My animal soul has fallen off the hill.

She’s at the end of the rope, at the last link in the chain.

Lend me your ten toes, your ten fingers.

To guide my wayhel back into her tiger cave.

Back in the green cave where my Spirit lives.

Lift her up with a cloth that smells of roses.

With a rose, lift me up.

Lay me down in the shade of the vine.

Elder Brother who feeds the Souls:

Guardian of the Corral:

Spin around in a circle,

Turn around in a square.

Don’t let the tiger out,

The wolf, the coyote, the fox, the weasel.

I’ve brought pigeon stones for the hand and the foot

Of She Who Sees From Far Away Through Dreams.

Make my day longer with the sweat of your legs,

Your hands that glow green as precious jade,

Carry me, embrace me and my tiger, and my jaguar.

This is all I will bother you with in the name of the flowers.

Keep my animal alive for many years

In the pages of the Book, in its letters, in its paintings,

On the whole Surface of the Earth. 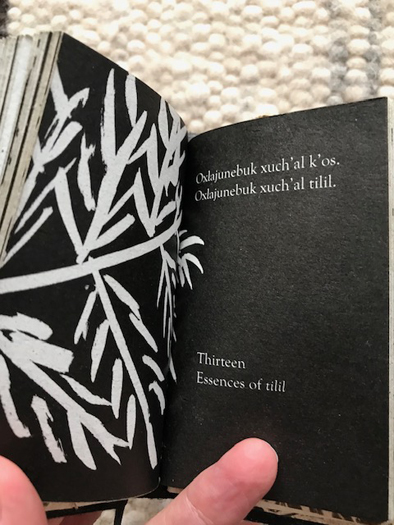 Atlas Obscura just published an article on the collective. For more background and photos than I’ve offered, do read it. It brought back to me the sheer magic of the place, the beauty of Taller Leñateros’ mission, and its fragility.

* I attempted to contact Ambar Past to gain permission to use the prayer in its entirety, since to segment it with just a few words would do it a disservice. I have been unable to reach her over time. I was advised that Ambar had withdrawn from the world and is now living in a monastery in Nepal. The suggestion came from a friend of hers to use the prayer listing the Maya woman whose version it is, there being other similar versions in the villages. I intend respect and hope to have done it justice.

**Wayhel is a Tzotzil Maya word meaning animal companion. In the words of Ambar Past, “…associated with shamanism, the portals of the Underworld, communication with the gods and the dead. The wayhel accompanies its alter ego from the moment it is born…” If one suffers, the other suffers. If one thrives, the other thrives.