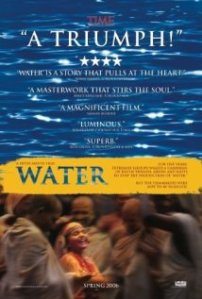 This film is set in Varanasi, India during the time of Gandhi’s rise in the 1930s. It is, at once, much like India herself. The cinematography is incredibly beautiful recording the most holy temples, landscape, people and colors while forcing us to acknowledge devastating conditions in which so many of the people live, particularly women. A paradox placed upon the people through their most sacred beliefs. But it does not leave us with such discomfort alone. It also presents hope.

This is the story of eight year-old Chuyia, left suddenly a widow at the death of her many years older husband. As the sacred texts direct, she is sent to live in a house of widows, an ascetic, hair shorn, eating one meal a day, even though she never lived as a wife with her husband. A heart-breaking account of a practice that continues to this day in some areas. Doctrine states that while her husband is alive a woman is half his body, and when he dies she is half his corpse, held in highest esteem and yet treated badly, then living in the most extreme poverty. The hope offered in the film comes through the bond that develops between young Chuyia and some of the widows, the intervention of a stranger and the new teachings of Ghandhi making headway during those times.

The film was so controversial that, during its initial making in 2000, filmmaker Deepa Mehta, cast and crew were driven from Veranasi, their safety threatened by mobs and the set torn down, causing the project to be abandoned for a few years. Four years later, Mehta was able to complete the film in Sri Lanka. It was nominated for an Oscar in 2005.

Rather than be put off by the subject matter, I invite readers to view the film. It has a beautifully haunting quality that will stay with you for a long time. Available in DVD or watch online free. The soundtrack is equally mesmerizing.

Book Review: The Painter from Shanghai

I’m always attracted by novels with a backdrop of art, controversial times and exotic locales and quickly became engrossed in The Painter from Shanghai. Only at the end did I realize the central character and many of the supporting ones actually lived. The times were dangerous and the daring commitment of those chronicled in the book’s pages is penetrating.

The author has written a fictional account of Pan Yuliang, a Chinese artist often known in her own country as the “Famous Western-Style Woman Painter”—a title she abhorred because it noted her gender. As a young girl in the early 1900s she was sold to a brothel by her uncle. This is the story of her origins and how she managed to leave that life to enter the world of art, something unheard of in those times, to become a well-known international artist and professor. The reader travels with her from China to Paris to Rome and back to China as she maneuvers between the strong pressures of Chinese tradition, dedication to her art and the political, sometimes deadly upheaval of the 1930s and 1940s. The book provides excellent entertainment as a novel. But it also educates about strict Chinese conventions, some of the heart-breaking practices Chinese women had to endure, and the intersection of Communism and Chiang Kai-shek’s Republicans. Above all it’s about the inner life of an artist and hard choices she makes to adhere to her dream.

Available at Amazon and elsewhere.

Thought Forms in Black and White

I was in Bali during August 2007, most of it spent in Ubud. In my experience, it’s rare to be in a culture where the spiritual traditions and values are so visible even to a casual observer. There are many things I took away with me, but I’ll offer just a few here.

The first has to do with prayer and ritual integrated into everyday life. There are temples everywhere—public temples, shrines on the streets. And every family compound has an altar even if it’s a small one tucked into a corner, but many are quite elaborate.

The women seemed to spend a lot of time making small, flat offering baskets from bamboo fronds, measuring about 4 inches square. I’d see them sitting outside storefronts or on the sidewalks talking together while their fingers were busy. For the last week I was there, every morning I watched an elderly woman make her rounds in the bungalow compound where I was staying. She carried a large flat basket in her arms, which contained those smaller ones all holding flower petals, incense, rice, things to attract notice of the gods and signify prosperity. Not only did she place one at the compound shrine and at the base of all the statues, but in front of the bungalow doorways and even on the manager’s desk of the adjacent Internet café; all the important places to create a flow. Later walking through the streets or driving through the countryside, I’d note them in front of businesses and homes, almost everywhere.

The moments for remembrance and gratitude were ongoing. Not a time set aside, but included. One day I had hired a driver to take me to the coast. Along the way, he asked if I minded if he stopped for a few minutes. He pulled over outside a kind of marketplace. While I was fooling around with my camera, he got out. When he returned he had rice pressed into his forehead. During one night’s dinner I was enjoying my food (immensely) and observing my surroundings. One of the servers would stop the others as they passed by. She dipped a flower in a water glass and then anointed them on the head with it. Not playing around, but blessing them.

The understanding of interconnection is also prevalent—family, the banjar, the community. Our style of life in the West is shocking to them. The fact that we seem so disconnected when “I am because you are.” 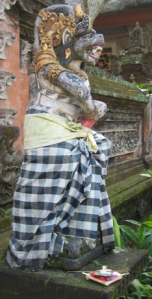 Perhaps more than anything I was taken with the sacred statues that were prevalent at every turn, not just in the temples. They seemed so exotic and expressive to me, not at all benign. I had a very kind driver who was not only quite curious about my culture but also eager to inform me about his.

He said, “Foreigners make a mistake and say we have so many gods. That’s not so. Our gods stay inside the temple and are only brought out for special times.”

I asked him about some of those I saw frequently that look somewhat like serpents or dragons and he disclosed that they were translators, conduits. They took the messages of the gods and translated them so we could understand them. And when I asked him about the black and white checked sarongs on just about all of them, which I was quite fascinated by, this is what he said.

“They remind us that we all have both good and not so good inside of us. This is to remember balance.”

In Bali, those reminders abound. Balance. Work gets done, but the days aren’t overly long. Acceptance of both sides of human nature without going to either extreme, or rejecting part of the self. Connection. And the middle road is valued. No wonder I was so touched—and relaxed.

Carla speaking here: When I was a young girl I had a vivid inner world but reticent to share it with others, being painfully shy. Strangely, one thing I wasn’t shy about was my singing voice. I sang all the time. The summer I turned fourteen my family moved to a different state, the latest in several moves during childhood. A neighborhood girl and I spent hours recording ourselves singing Mamas and Papas songs just for fun, when we weren’t getting in trouble for one thing or another. That was the late Sixties…and you were expected to push the edges.

But something happened in September. My newfound friend and ally went to a different school. What bit of security and grounding I felt in the new environment was no longer present. Over the next months I made my way tentatively, finally settling in with a handful of girls, cliches being a matter of survival in junior high and high school beyond. But when I’d join in with songs on the radio…or hum under my breath you’d have thought I’d grown two heads, the responses I received from my friends.

Everyone feels out of place and wants to fit in during teenaged years…and at the same time want to be different. A terrible conflict. So, most of us shut down aspects of ourselves. In my case, it was my public voice. My singing voice was silent for decades and so was my ability to express in the most basic ways outside my family.

It was only years later that outer expression began to come again, part of an evolutionary process. By that time though, being so unused, my throat would hurt and my voice was so weak, it refused to emerge fully when I’d attempt it. I even went to India for a short time to study raga, Indian classical vocal music, with Sufi leader Shabda Kahn, in hopes of overcoming the block. I succinctly remember the day in practice when Shabda looked at me in what could only be described as loving irritation and bellowed, “Get your voice out!” Yet, still, I physically couldn’t.

Yaqin speaking here: In the path of development, of spiritual and material development, one of our most important tools is the human voice. One can easily see this in how the voice of another affects one. Likewise, as the Sufi Inayat Khan said, the voice is the expression of a person’s spirit. Knowing this one may direct attention and practice towards developing and opening the voice. Further, there is an ancient and sacred teaching on the mysticism of sound, and how it how it can be used. As the Sufis say, through recitation and concentration: “…travelers on the spiritual path can overcome narcissism, resolve their issues of separation from God and from humanity, and awaken to God’s presence…”

Carla again: In 1998 I moved to Prescott, Arizona. Strangely enough, I found a small Sufi community there. I’ve always been drawn to the Sufis for their inclusiveness. Yaqin Lance Sandleben held monthly zikr, a Sufi chanting devotional practice. I attended religiously for years until travel and my own work made it difficult to be there. I am indebted to Yaqin for the space he continued to hold those years. My voice had varied little…until one night. We were well into our zikr when suddenly a voice burst forth with a sweetness and power I hadn’t heard before. Surely, it had come from someone else. But I had to acknowledge it as my own…and acknowledge it still.

Giving voice comes in many forms. It’s our birthright to express and sometimes a journey to come back to the place where we began, without fear, to offer to ourselves and the world our own special expression.