Book Review – To the Field of Stars by Kevin A. Codd

In his introduction the author begins with: It may well come to pass at a certain point in the course of a life that a person hears of stars dancing in a field at night…I am about to share here a story about stars at dance…

And he immediately had me hooked because I’ve learned over a lifetime to answer a call, never regretting it. I’ve seen stars shining from a high altitude lagoon at the base of Apu Ausangate, a sacred mountain in the Cusco Region of Peru, when none were overhead. I’ve felt waters enter me as I made an offering at one of St. Brigid’s Holy Wells in Ireland. I’ve experienced a transmission through the gaze of Santa Marta after the religious festival of San Sebastián in the highland Maya village of San Juan Chamula. So I believe in such things.

Kevin Codd is a priest. Don’t let that deter you if you’re not Catholic. I’m not. Or let the trappings surrounding the Camino de Santiago stop you, whether it’s a passing interest or a real pull to go. As Codd describes in this book, the 500-mile pilgrimage to Santiago de Compostela is so much more than its religious history. It’s where you discover yourself and what else you’re connected to and how. With centuries of tradition, so many feet covering the same path, the Way to a place, which translates to mean field of stars, is an undertaking to do so.

Codd tells us why through his own experience at age fifty on his first Camino. He is quite generous in his descriptions. As much as I read the book as a spiritual guide, it also serves as a practical one. He walked the Camino Francés.* I’m walking the Camino Francés in May. I appreciate his descriptions of the villages, refugios and more hidden places to visit I might otherwise miss.** He warns about being competitive and the blisters it can get you. But he also tells you how to take care of the blisters and how to prepare in ways he didn’t. Codd openly wrote about his own emotional and mental struggles in the course of the journey. His honesty was compelling because I know I’ll have my own.

I’ve read or perused other books on the Camino as I prepare for my own journey. This one remains my favorite. Available on Amazon and elsewhere in print or e-book.

*There are many Camino routes that take you to Santiago de Compostela. The Camino Francés begins in the French village of Saint-Jean-Pied-de-Port in the Pyrenees and crosses into northern Spain.

**Refugios are specially run dorms for pilgrims walking the Camino.

Pilgrimage infers travel, a journey undertaken with intent—not as a lark, although fun can be a part of it. Sometimes the mission is known ahead. Or it’s discovered along the way. Just as true, it may only be in hindsight, a lengthy time passed from the conclusion, that all comes into focus. Ah, there’s the reason I went…

One thing is certain. It’s a passage made with holy purpose, and you must leave the homeland in order for the pilgrimage to occur. I’m using the word ‘holy’ for a reason. It’s a term people usually back away from because of its connotations, often for the same reasons ‘pilgrimage’ is given wide berth. Here I’m using both for common purpose, giving them due because they take us to a place we normally don’t dwell.

To undertake a pilgrimage, your soul must come through, reaching out from that core level. It’s a call to engage, go deeper. It’s a yearning to venture into the unknown. Some conclusion is sought. It’s time to step beyond a threshold, out of the status quo.

Your soul is offering the invitation. But it’s your everyday self that has to accept it at some level because…

You’re offering yourself up to a foreign land…

Little is likely to be what you’re used to…

There’s certain to be physical, emotional or mental discomfort—maybe all three!

And it’s through such radical departure that you discover what you’re made of—sometimes quite the surprise. As a result, you’re enlivened. Your constructs are stretched. You’re taken beyond your limits. Your new world emerges.

Sometimes folks attempt to fool themselves into it by saying such things as:

I’m expected to do it.

I’m here to support my spouse…friend…(fill in the blank).

That’s a place I always wanted to visit.

Whatever it takes to get you there is fine. In the end, there will be certain recognition for most:

This is spiritual travel. And it’s pure medicine.

In early November I returned from The Heart of the Andes during which we made a pilgrimage to the Q’ero village of Ccochamocco, perched at 14,300 feet.* Harold Joseph, a Hopi Wisdom Keeper from the village of Shungopavi, Second Mesa, Arizona, was sponsored by Kenosis Spirit Keepers as an emissary for his religious leader Lee Wayne Lomayestewa with a mission to request prayers from the Q’ero community for continuity of threatened Hopi traditions. Harold said, “The Q’ero spiritual leaders make strong prayers!”

There is no road up to the village. In order to get there we sometimes rode on horseback, much of it walking through some of the most beautiful and steep landscape I’ve experienced. Harold stopped a number of places on our journey to give his own prayers and leaving offerings, as well as during despacho ceremony during our time in the village.* We were truly privileged to be part of all of it.

The highest point to and from the village is 16,000 feet before descending. On our return, as some of us were already ascending, I began to hear a voice echoing from the valley below, calling forcefully every few minutes. I couldn’t understand the words or see who it was. Later I learned it was Harold giving us all a message that Hopi Spirit Keepers used with each other during times of challenge in the kiva, after many long hours of prayer or enduring inclement weather during ceremonial dances.

The highest point at 16,000 ft on the pilgrimage to Ccochamocco. Photo credit: Carla Woody. 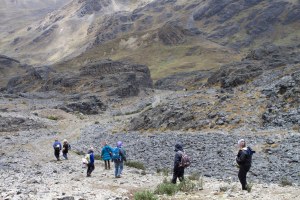 He said it’s meant to strengthen spiritual warriors, to remind them they’re doing what they’re doing for more than just themselves. They’re doing it for their community and more…for all humanity. I will never forget Harold’s message bouncing from mountain to mountain.

After we were home for a few weeks, Harold sent me a note about our spiritual travel journey: “The effect on my life has been enormous in terms of the spiritual connections that was made in behalf of the Kikmongi.*** The awareness that we are spiritually connected to creators and keepers of life: Katsi. No changes in my life but emphasis on the importance of carrying on my responsibility as a Hopi and its ceremonial practices that rejuvenates life here on Mother Earth and the Universe for future generations.”

In early May I will begin walking the Camino de Santiago, a 500-mile pilgrimage in northern Spain. My old friend Oscar Panizo is going with me. People ask me why I’m doing such a thing. I can’t honestly give a concrete reason. I just know I’m called to undertake it. The whisper had been hovering in the background for a while, and now is the time.

I also know without a doubt: I will repeatedly hear echoes through time—Harold’s voice encouraging me.

*The next Heart of the Andes will be October 23-November 5, 2015 and include Bolivia and Peru as a special initiation journey mirroring the path designated by Viracocha, the Incan Creator God. Six Q’ero Spirit Keepers have been invited to accompany us in a pilgrimage that will take them back to their origins. A portion of tuition is tax-deductible to support their sponsorship.

**A despacho is a prayer or blessing bundle made in ceremony by Quechua and Q’ero peoples of the Andes.

*** Kikmongi is Hopi for religious leader.