The Lifepath Dialogues Gathering is held on the fourth Wednesdays, 6:30-8 PM, at Creekside Center in Prescott, Arizona. The intent is to build like-hearted community and dialogue about what truly matters. I choose monthly topics from my blog and host the evening with special invited guest(s) whose philosophies and work are relevant to the topic. The format involves my presentation of material to create a framework and interview of the special guests. This portion is recorded to share with the world community—wherever you are. Then we turn off the recorder and turn to intimate sharing.

This discussion was based on the collaborative post: What Legacy GMOs?

I was out of town for the October gathering. I want to thank special guest host Lesley McKeown, Vice Chair, and board member of GMO-Free Prescott, a nonprofit organization seeking to raise awareness of genetically modified organisms (GMO’s) and encourage nourishing food options. October was National Non GMO Month. This topic is so important to health and preservation of tradition. The subject matter is a very tangible aspect of spirituality: what we put into our bodies.

The complete unedited audio is about 40 minutes long. Click on the link below to listen. Please be patient as it may take a few minutes to download! I hope you enjoy. 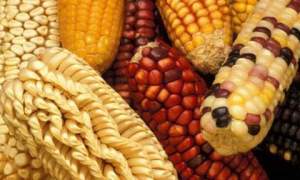 Our next gathering will be held on Wednesday, November 28, 6:30-8 PM, at Creekside Center as usual.  My special guest will be Yaqin Lance Sandleben, an ordained Sufi minister.

To remain current on monthly topics subscribe to The Lifepath Dialogues blog or Kenosis Inspirations ezine.

In July 2012 I visited Ireland with my folks. We’d driven to the Cliffs of Moher finding the coast socked in with fog, nothing visible. Somewhat disappointed, we continued on the narrow, winding road toward the village of Liscannor following the map back to the cottage where we were lodged miles beyond. I almost didn’t see the small sign pointing off to the right that said: Saint Brigid’s Holy Well.

At the time, I didn’t know anything about Saint Brigid or Ireland’s holy wells. But I did know that springs, caves and other natural formations are often special places of ceremony and prayer for ancient and present-day peoples who connect with the Creator through those means. Due to the countless rituals and natural properties of such sites, pronounced energy resides in an ongoing way, a container. I’ve experienced many of them.

The holy well wasn’t immediately apparent. In fact, we doubled back on the country lane that took us way back in farmers’ fields to return to the original intersection. On top of the hill was a cemetery but below was a small courtyard. Tucked into the hill was a slit just wide enough to hold one person. Visible even from the outside, figures of saints sat in a tight row leading into the darkened inner chamber; layers of rosaries adorned them. The short path ended in front of the spring. Prayer cards, handwritten messages and photos of loved ones covered the walls. One step inside and there was no doubt that we had entered sacred space; the energy was palpable. Petitions for healing, devotion and hope hung in the air. My mother said she felt sadness. I’m sure that was present, too.

But there was also celebration and gratitude. The note from five year-old Jimmy Delany said that at three weeks old he stopped breathing in his mother’s arms. He was revived but in a coma. He recovered without the side effects expected by the docs—that he’d be a “vegetable.” “Unexplainable,” they said. 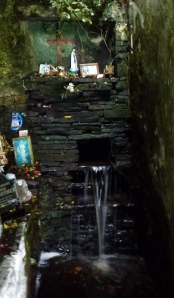 I stayed there for quite a while, long after my folks went ahead to the cemetery, and performed my own ritual. Kneeling before the spring, I dipped my palms and brought the waters over my head, whispering my own prayer. And in that moment, I felt the sweetest sense of fullness, an energy transmission that deposited itself in my sacral chakra. I have no other way to speak of it—and it’s with me still, present every morning during meditation.

On the stairs up to the cemetery a small tree was covered with ribbons, small pieces of cloth and more rosaries. An old custom most often maintained by Ireland’s Travellers, when something is hung from a “rag tree” it’s believed to heal the person it belongs to as the item weathers and disintegrates.

I had no foreknowledge that: “…This site has a particularly mysterious atmosphere which may be felt at once by the pilgrims as they enter…” But I can speak from experience just as from other times at the holiest of places.

Before being claimed by the Christians, Brigid was known as the “exalted one” credited with miraculous healings and patron saint of the Celtic Druids. Saint Brigid’s crosses are seen all over Ireland. The story goes that, after healing a chieftain, she made a cross out of rush in thanks. I bought one to bring home but I need no reminder of my time at her holy well.

Exploring the many threads that weave together an expressive, celebrated life.

MARK YOUR CALENDAR AND JOIN US FOR DIALOGUE THAT MATTERS

You are invited! Please pass to friends and family.

The Ways of Inclusion

Based on the post: The Gift of Mother India

November’s special guest is Yaqin Lance Sandleben. Yaqin is a Cherag, an ordained minister of American Sufism following the Chisti Sufi lineage of India. He leads the Dances of Universal Peace, Universal Worship Service and offers guidance on the path of spiritual awakening. Yaqin lives in Prescott, Arizona, where he has practiced pharmacy for 35 years, raised a family, and served the community in different ways—mostly through volunteering.  His interests in religion, spiritual development, and the awakening process began at the age of 12 in the Christian Church.   For many years he studied well known and obscure paths of awakening.  He began meditating 40 years ago and embraced American Sufism 33 years ago.   He has also studied and practiced Buddhism with many teachers, including HH the Dalai Lama and other Tibetan teachers.  His Sufi connection has led him to India, to the shrines of saints, and to the study of Raga, Indian Classical music.
PLEASE NOTE: There will be no December Lifepath Dialogues Gathering due to the holidays. We will return to our regular schedule on January 23, 2013.