I’ve been listening to the audio version of Fire Season: Field Notes from a Wilderness Lookout by Philip Connors. It’s been a good companion over these last couple of days’ flights home. Particularly in long delays or crammed up against fellow passengers, it serves as a reminder that I’d rather be anywhere than where I am at the moment. And it takes me there.

I’m envious. Notified by a friend of an opening for fire lookout, he quit his job in Manhattan where he was a journalist and during the fire season lives in the Gila Wilderness of New Mexico in a small box held up by stilts. He watches for fires and calls them in.

In some directions, the gaze settles on nothing but vast wilderness. It must have the same effect as gazing into a night sky unobstructed by human-made light. The more you gaze, the more the night sky invites, catapulting you into never-ending depth. There’s the sense of our small place in the universe and ancient knowledge we’ll never know. I imagine it could be a lonely job if you’re not cut out for this kind of solitude and little outside human contact. But for those who instead make friends with nature, find solace in silence and discover meaning in the wind, it must be pure heaven. 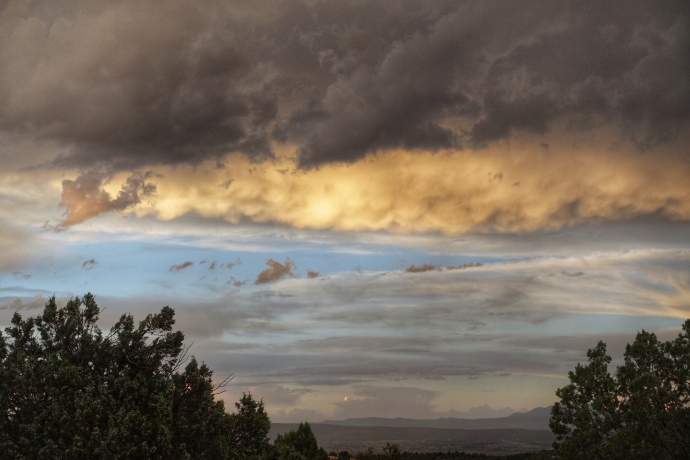 Connors focuses on the 2009 fire season and walks us through his daily life, controversies through the years about the service natural fires perform, the cycle of nature, prescribed burns, what happens in drought years, and philosophical thought. I particularly found interesting his detailed description of sighting tendrils of smoke when he was out on the trail, knowing he was the first to see it, how he sent the alert and the actions taken from that point by wildfire fighters. Considerations if the fire got too close or overwhelming, what options he had to save himself.

I’d never heard of fire lookouts until I moved to the Southwest. Now the possibility of fire hovers in the back of my mind during the season. It’s come quite close to me a few times and otherwise engulfed local areas, leaving devastation and lost lives. And I always think of the animals.

One year — I think it was 2002 — I had a chance for a small taste of what it was like to be a lookout. An acquaintance had been one for years on Mount Union, the highest point at 8,000 feet in the Bradshaw Mountains of the Prescott National Forest.  He’d been inviting me out for some time. One weekend I decided to drive up there, quite the feat for the car I had at the time, especially as it had started to rain and fog was rolling in. Unbeknownst to me, it happened to be the weekend he was going down to Phoenix. I arrived just as he was leaving. He encouraged me to stay anyway.

The clouds had by now enfolded all. I could see only several feet beyond where I was standing in any direction. I was completely alone.

I went inside the cabin, having thoughts toward dinner. Choosing one from the many books Jon had, I carried my plate to the small table in front of the west window, which normally held a view level with, or above, far mountaintops. At the moment, I saw nothing but a solid white wall. And by now, the gentle rain had turned into a storm.

I glanced out the window and couldn’t believe what I saw. An immense fiery ball seemed to be hovering just beyond, in the ravine. I went out onto the porch to investigate. There it was—huge and blazing. How could the sun be coming to me in this way through the now torrential rains and impenetrable shrouding of clouds? I stood watching, awestruck, until the last remnants of this light finally disappeared.

Even though the storm was raging, I was compelled to sleep in the tower. I lugged my sleeping bag and a flashlight up the steep metal stairs, along with some water and Saint Thérèse’s book. After arranging my bed for the night, I stilled myself and just watched the scene before me. From an altitude of around 8000 feet and the further height of the fire tower, I had a sense of being on top of the world. The clouds had raised enough that I could see the panorama of lightning dancing across the land. I’d never seen such a demonstration of raw power. Some strikes seemed too close for comfort and the thunderclaps vibrated the tower’s cabin. But I just stood witness and found an uncanny metaphor in the stormy night to some of the inner turmoil that I’d brought with me to that place. Finding myself distracted and unable to read easily by flashlight, I lay listening to the sounds of thunder and raging wind for the longest time, feeling somehow perfectly safe. Peace was penetrating. I finally slept.

I opened my eyes very early the next morning. I heard no sounds of wind or rain. All was silent. I sat up. There were no clouds anywhere. Peace had come to the landscape. I could smell the fresh scent of washed pines coming to me through the small crack I’d left in one of the windows close by. My eyes came to rest on the mountain range toward the east. First light was appearing. I watched as the same fiery ball rose into view, smaller now, but its appearance just as profound to me. The cycle of renewal was complete.

— Excerpt from Standing Stark: The Willingness to Engage

That night was so precious to me. I’ve never forgotten it. In such environments, things are more real somehow than at any other time.

Connors’ recounting also made me recall the years I lived in Germany. Especially those couple of years in a village where the road by the house ended several feet away in pasture, then shortly in forest. Forests in Germany always seemed manicured to me. Beautiful, but pristine and tamed. Each village has a forstmeister, or forest master. I wonder how their role compares to the fire lookouts and forest rangers here in densely forested lands of the US. I appreciate the wildness.

Fire Season will be of special interest to those in the Southwest and other such forested lands. He wrote of places I know. And for those who live in places like Manhattan, it may ignite something similar like it did in Philip Connors.

Several months ago, I was listening to Elizabeth Gilbert’s 2016 interview of Neil Gaiman on her podcast Magic Lessons discussing the creative process and other people’s expectations. If you’ve done something they like, they want you to repeat it. They don’t want you to surprise them with something else. The gallerist who wants a body of work. The publisher who wants a genre. No matter the author has a history of bestsellers. Write outside the genre they’re known for…and the publisher isn’t interested. What they’re really saying they want is consistency without risk to the bottom line…marketability.

Gaiman told a story. There are two types of writers: dolphins or otters. Dolphins are very good at doing tricks a trainer wants them to do — in exchange for a fish. They’ll do it over and over again. There’s some banter about the dolphin living in captivity and being very good about training the trainer to get what the dolphin wants. It all sounds like manipulation to me.

Then there’s the otter. No one can train an otter. Why would you want to do the things you just did when there’s the next thing to be done? That’s why there aren’t any otter shows…

It’s plain to see Neil Gaiman is an otter, quite the successful one. He’s readily described as a prolific creator of works of prose, poetry, film, journalism, comics, song lyrics and drama.

Consistency — in the terms it’s meant by gallerists, publishing houses and art collectors — bores me to tears. That’s why I took a long break from oil painting. I’d done it off and on across nearly 40 years, with long pauses, until I just couldn’t stand it anymore. But the creative urges kept calling. So, I took up writing. Quite the divergence.

In hindsight, that was the point where I gave myself permission to be as diverse as I liked, and wish I’d done it much sooner. I’ve been so much happier ever since. It matches my nature, and I’ve never done well with attempts to box me in. I refuse to create in a formulaic manner. Fine for others. But for me, it would dull things down and dispel any feelings of awe the process can bring.

My return to visual arts, finally, was black and white photography. It had always fascinated me. It was emotive. With tips from a photographer friend, I purchased a manual camera and began shooting black and white images. A few years later I discovered mixed media. By virtue of its very name it encourages exploring, combining things in ways to make it more than it would otherwise be using one lonely medium.

Here at long last I’ve found a home. What it took was making the decision to create in the way that was most inspirational to me, not by the dictates of the outside world.

The Ancestors Speak to Me Mixed media on wood cradled panel. ©2018 Carla Woody. 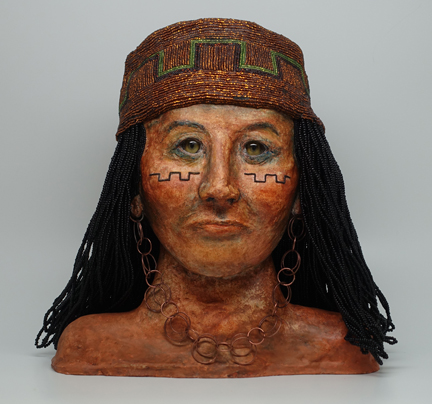 Second, after study about such things, I recognized how my mind works and why I rejected the formulaic method often preached. I accepted my difference instead for the formula my mind came up with that produces efficiently for me more often than not.

I Hold the Keys Mixed media on canvas. ©2019 Carla Woody.

My personal strategy is in first creating the vision in my mind — the outcome — then gathering up piece parts, considering fit of different media, combining them in such a way most likely to induce the effect I envision. It’s a consistency I can abide by, and it’s rarely the same twice. The strategy isn’t step-by-step and usually not conscious, but a flow when functioning well.

But the most important thing I found? I said it earlier. Giving myself permission to hold the inspiration and strike out beyond any confine. Here is the same thing said in another form of mixed media.