We Are All Artists

When I’m especially taken with a book, I greatly anticipate the author’s next one. This was the case with one of my favorite novelists, Jim Fergus. Visits to his website had promised one for several years, even with a specific title and subject matter that is of interest to me. But each time I checked … nothing … and I’d log off disappointed. A few weeks ago I checked, this time discovering he had a new one out. I promptly ordered it. Yet again he’d produced a story that touched me in tender places, as much as it informed. I did something I don’t normally do: I emailed him to express my gratitude that he’s writing again.

He responded. It started a conversation.

Jim told me the book had been published in France and done quite well. But when he went searching for a US publisher, no one was interested. Unbelievable, I thought. This is a writer whose two previous books—One Thousand White Women and The Wild Girl—were bestsellers! But with this new one? He’d stepped out of his genre of The West and Native Americans. He was no longer in the neat slot US publishers had placed him—therefore, a risk.

He went on to say the specific title he’d named on his website, Marie-Blanche, was published in France in 2011, currently in development for a mini-series there. Same problem with US publishers. Jim finally decided to self-publish The Memory of Love, the novel I’d most recently read … just to have a new book in print in my own country.*

This goes to show that even widely celebrated writers—and any such artists really—don’t necessarily have it made, as our fantasies tell us. They’re subject to the same tight restrictions and imperious whims if they depend upon the old-school bureaucracies and structures.

Now he’s writing a sequel to One Thousand White Women, the genre he’s known for, accepted by US publishers. There’s no doubt I’m wildly anticipating its publication. And I’m quite sure it will be a commercial success.

However, the unconventional part of me automatically made an appearance. I shared that I’d written three books and had chosen to self-publish specifically to avoid all the nonsense traditional publishers try to lay on you. I don’t have the time or energy to deal with it. Those who have found my books receive them quite well. **

I also mentioned that it’s the same with most art galleries. To accept an artist’s work, they want to make sure you’re consistent, no matter your talent level. Consistent in this definition means same general subject matter and media, same slotting as above. I’m fortunate to have found two galleries who are happy to show my work, no matter how much I experiment. And I do. I’m not a production line.

All aspects of my work—mentoring, spiritual travel programs, writing or art—appeal to a particular small niche, not the mainstream. And I’ve got much gratitude to those who engage with any of it. It means we’re part of the same tribe.

I often listen to Krista Tippett’s On Being interviews when I’m painting. I find them inspiring, and they sometimes inform the piece I’m working on in the moment. Right on the heels of the conversation I relate above, I listened to her interview with Seth Godin on The Art of Noticing, and Then Creating. No coincidence. Here are some relevant take-aways … *** 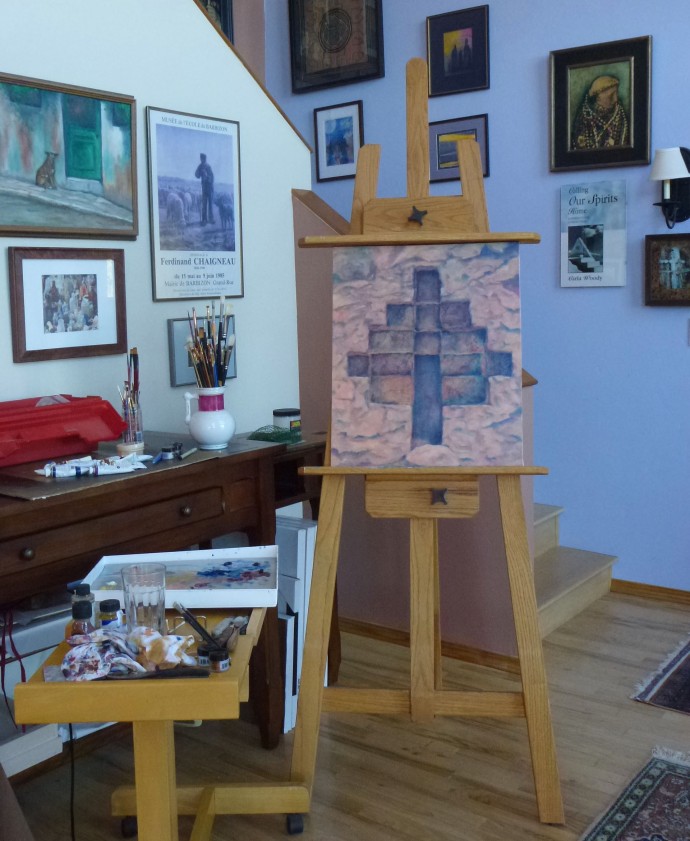 Mystery School currently in process on the easel.

This is the time of year—as we’re on the threshold of the next one—when I remind myself of these truths by viewing Sean Connery’s rendition of Ithaca by C.P. Cavafy, featured in this blog before.

It reinforces my intent.

Engage your passion. Fine tune. Put it out there.

*My conversation with Jim Fergus was relayed here with his complete permission. This is the review for The Memory of Love I uploaded to Amazon and originally sent to Jim with my first email:

Truly, Jim Fergus is one of my favorite novelists having also read  ONE THOUSAND WHITE WOMEN and THE WILD GIRL. This book is indeed a departure but at least equal to the others. I was personally touched by Chrysis’ striving against convention and evolution as an artist, and Bogey was portrayed as though the writer had lived inside those very emotions. The foreword shared why a man could write this way about love, and only at the end did I realize the characters had actually lived. I’d been waiting a long time since THE WILD GIRL for Jim Fergus’ next novel. I’m very glad he’s writing again. Now I’m looking forward to MARIE-BLANCHE.

***I recommend listening to the unedited versions of On Being interviews with Krista Tippett. They’re much longer but without the fine polish that editing brings. They’re real.

One thought on “We Are All Artists”