In late 2013 Xavier Quijas Yxayotl—Huichol composer, musician and artist—shared his life story with me. It was a real privilege to hear of his origins, struggles and inspirations. The thing about Xavier is that you’d normally never know the details of his backstory. But maybe you would pick up there’s something deeper. He carries a sense of humility that typically only comes by having gone through hard times…survived…and having instilled great meaning in his life, touching others through his craft and presence. 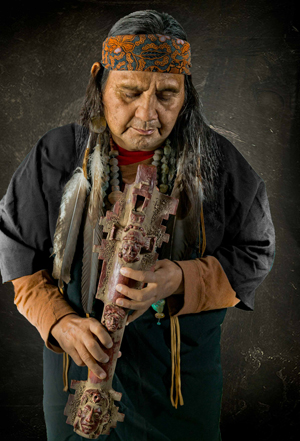 Portrait of Xavier Quijas Yxayotl with one of his handmade ancestral flutes. ©2015 Barry Wolf. All rights reserved. Used with permission.

With permission I turned his disclosures into a narrative that was picked up in 2014 by Still Point Arts Quarterly for their Fall 2015 issue. I thank editor Christine Cote for giving this important story space. I can now share the story in its entirety here as Xavier told it to me. I hope you are as inspired as I was.

The boy fidgeted. He was in foreign territory, held prisoner by his mother’s hand on his arm. They sat side-by-side in matching chairs before the great divide of a massive desk. His mother’s voice rose and fell. Words tumbled over each other as though, if she didn’t get them out fast enough, the man considering them would summarily swat them out the door, no different than pesky insects.

An hour before, his mother pulled him along inner city streets into a massive building. They finally stopped in front of one door among several down the long hall. She smoothed her skirt and combed fingers through his black hair. With a deep breath, she opened the door. The secretary looked up.

“Please, I would like to see the director,” his mother said.

“Do you have an appointment?” The secretary appraised them, noting their dusky skin and worn clothing. When she shook her head, the secretary motioned them to a row of chairs against the wall and picked up the phone. They waited.

The man behind the desk was impeccably dressed in a gray suit matching the color shot through his dark hair and mustache. The lines in his face softened as he listened, shifting attention from the Indian woman before him to the boy, eyes downcast, clutching a notebook in his lap.

“Maestro Caracalla, I am Señora Isabel. This is my son Xavier. He’s different, a good artist. In school he always fights because no one understands him, not the teachers, not the other kids. He’s always thinking. Since he was old enough to hold a pencil, he always draws and writes about everything. He’s like an old person in a little boy’s body!”

The woman continued at length relating how, in the last two years, her son kept running away to live on the streets. Xavier slept in parks, skipped school, survived by selling newspapers and shoe shines. Terrified, she would search and drag him home, if she was fortunate to find him. But the next day he’d be gone again. He wouldn’t do what his father wanted: to set aside these silly pastimes, to work making shoes to help support the family.

“We have seven children. Xavier is the youngest boy. We are very poor. But he is so different and I’m afraid what might happen to him. Is there something you can do?” She finished softly.

Maestro Caracalla gestured to the boy’s notebook, “Is this your work?”

Xavier froze in his chair and prayed to disappear. He didn’t think the Maestro would hit him like his father did, but he dreaded the reprimand he knew would come. He whispered, “Yes.”

“Show it to me then.” The room was silent save the sound of Maestro Caracalla slowly turning pages after scrutinizing each one. Finally he closed the book. Looking over wire-rimmed glasses, his eyes seemed to bore into Xavier’s very soul. He gazed at Señora Isabel then back at the boy, whose reddened face was moist with sweat. “Señora, I don’t think you have any idea what a beautiful child you have. What ideas! His writing doesn’t match his age. He’s not a normal child. You have to do something with him. We have to help him!”

Maestro Caracalla told her to bring the boy back the following Monday, handing over a long list of art materials to buy. There’s not enough to eat! How can we buy art supplies? Guilt flooded Xavier’s mind. He was certain of a dead end. But at the appointed time his mother delivered him to the Maestro. She could only muster a clean new drawing tablet and 6B pencil, keeping even that small expenditure hidden from her husband. The secretary ordered a sandwich for Xavier, although he said he didn’t need anything.

“Ah, there you are,” the Maestro swept in from his office. He took Xavier by the hand and led him down the hall. They stopped in all the classrooms where he spoke to the teachers, “I want to introduce Xavier. He’s coming to take classes.”

That is how an eleven-year-old Huichol Indian boy from the streets came to attend Escuela des Artes Plásticas, the art school in Guadalajara, Mexico—the youngest pupil ever to sit alongside regular university students. They became his peers and friends. Maestro Caracalla continued as his benefactor for six years, making sure he had all the classes he needed: writing, painting, art history and more… 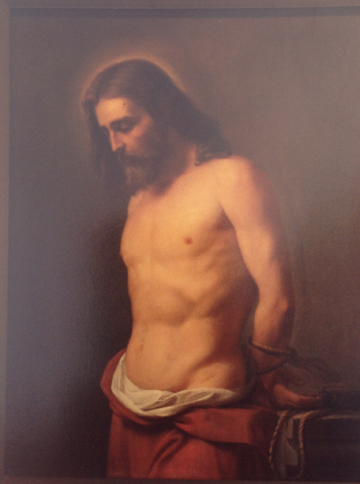 Painting by Xavier at the age of 18. Photo courtesy of Xavier Quijas Yxayotl. All rights reserved. 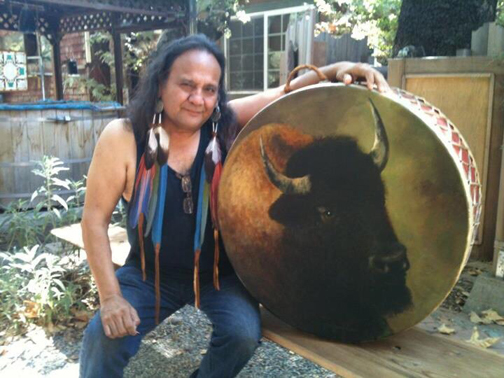 Xavier with one of his painted pow wow drums. Photo courtesy of Xavier Quijas Yxayotl. All rights reserved.

Continue reading Xavier’s story here and find out how he returned to the Huichol roots denied him as a child, and went on to resurrect ancient instruments lost to time through visitations from his ancestors.