A few years ago, I was in the Musée d’Orsay in Paris and copied these words from a plaque on the wall in one of the many rooms that contained art works from the mid-1800s through the early 1900s.

A young painter asked Gaugin for advice and he answered, ‘Do not paint too much from nature. Art is an abstraction; extract it from nature while dreaming in front of it and pay more attention to the act of creation than to the result.’ 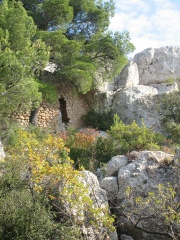 Paul Gaugin’s words punctuated, for me, similar reminders coming over the course of travels in Provence with my group, which then culminated in Paris. As always, those things that stand out to us are what we’re there to encounter. This theme was mine to hear and one that is still prevalent in pockets of France, especially Provence.

Mont Ste. Victoire is a hulking giant of a mountain dominating the Provençal landscape. Post-Impressionist artist Paul Cézanne was fascinated with it. Painting it numerous times, he even had a refuge near the top, to the point we hiked and picnicked having our own luncheon on the grass painters Manet and Picasso might have found acceptable.*

Near Ste. Victoire’s base sits Mas de Cadenet, a winery that has been in the same family since 1813 producing exquisite examples of Côtes de Provence. We stopped by and Matthieu Négrel was waiting for us.

For such a young man, Matthieu was quite the inspiration. Only 25 at that time, he was set to take on a large role when his father retires. Indeed, he had already stepped into sharing many of the important decisions about cultivation of the vineyard and wine-making. We even had a discussion about what it was like to have such a family legacy and the expectations that may come with it, whether it was a harness or a sort of freedom. For Matthieu, it was obvious that he had found his passion early on—and it rested in the land, rhythms of nature, things tended with care, patience. He seemed to contain a distinct knowledge of his place in the world, rare for someone his age. With unabashed charm and a lot of gesturing typical of the region, he exuberantly related fact and philosophy about grapes and wine-making. We were not bored and much of what he relayed was done through metaphor. Matthieu and his family produce wine from vines that range from 35 to 50 years old. 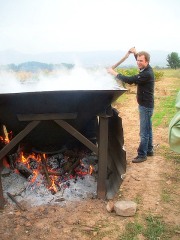 Standing in the vineyard, with Ste. Victoire as the backdrop, he told us about his life. How it was to plant a vine and wait—to harvest only after 5 years. Pointing out a vine planted when his grandfather was a young man and then another planted when he himself was a child, he laughed and said, “Things are very s-l-o-o-o-w here in Provence.”

On another day we traveled through the beautiful countryside on winding roads, climbing in elevation and finally came to a Religious House with lavender fields surrounding it. Tucked away in the Alpes de Haute Provence region, discreetly out of sight, three sisters of the Soeurs Coopératrices Maison St Joseph live in an old farmhouse. They are known for cultivating lavandan, a prized type of lavender only grown at this particular altitude, producing the highest medicinal quality essential oil, in the old way, mostly by hand and not technology. Sister Marie Michelle, who greeted us, had a similar glow about her as the one Matthieu had, but many, many more years.

She showed us their fields and, even though it was late in the season, we could smell lavender faintly in the air. She talked about how they carefully harvested and let the blossoms lay in the sun a certain amount of time so that the oils they made would be at the best strength for all the ways they could be used. She bemoaned the fact that other lavender farmers used machinery that cut the stalks in such a way as to lessen the quality and then didn’t allow them to “strengthen” in the sun after harvest as needed. It was all done quickly, cut and dried—so to speak. And she was quite clear that what sold as lavender essential oils in the world market was lavandin, having much lesser properties, and not lavandan. I was curious how three elderly sisters managed all the fields and harvest until she told us that people from the local community helped. When the sisters are gone, will this art become lost?

I’m going to come full circle and talk a little about painting. I’m an artist, using mostly oils as my medium. During my lifetime, I periodically took a hiatus from that art form for various reasons. The last rationale was because I moved cross country and no longer had a studio—or so I told myself. I took up black and white photography for several years, but found it not as tactilely satisfying. For a long time, my friend and spiritual mentor Don Américo Yábar had been urging me to paint again and said it would be quite different than what I’d done before. I thought he meant that my subject matter and style would be esoteric based on my experiences in the last number of years. In the fall of 2009, after a 12-year pause, I began to paint again. It just seemed right somehow, without Don Américo ever mentioning it at all when I had been in Peru that summer. And I discovered what he may have meant—however else my canvases may eventually develop. When I was much younger I painted fast and furious, always with a goal in mind, turning out a completed work typically in somewhere between 4-8 hours. Now I’m painting on the same canvas for weeks, sometimes longer. Quite content in the process, I’m allowing the colors to emerge and what expression is more deeply inside me. Perhaps I’m becoming like the older vine Matthieu talked about. Not quite the elder and I’m not yet holding it all inside. Too much to discover still!

But I think what I’ve learned over the years, that is coming out in my painting, and what was echoed through the people we engaged with in Provence, is this. There’s great value to immersion in the integrity of a process. Then the quality of the outcome is naturally delivered. I’ve been taught patience for things to come to fruition. Some things need to happen for others to evolve. When you know this at a visceral level, it brings that joie de vivre written so plainly on the faces of those who live through that understanding like Sister Marie Michelle and Matthieu. It also takes faith—and sometimes more than a little stamina.

*Édouard Manet turned the French art world upside down with his controversial painting Le Déjeuner sur l’herbe. Pablo Picasso later did his own versions of Luncheon on the Grass.

2 thoughts on “Acts of Creation”