How the Dreams of Chief Hawk Pope Came True

In the late 1980s after my return to Ohio, I took oil painting classes for a couple of years from Chief Hawk Pope of the Shawnee Nation United Remnant Band. I valued his sheer presence and laser-like critiques. He was direct, something I appreciated. I was there to learn, not to have my ego soothed. When something worked, he pointed it out. When it didn’t, he showed how it didn’t and guided correction—explicitly.

I’ve learned that his methods are part of his personality, the make-up of a strong chief, not asking any more of his People than he demands of himself. But that understanding wasn’t even on my horizon when I knew him back then. My interest and passion for preservation of Native ways was yet bubbling beneath the surface, not to fully emerge until the mid-1990s. By that time we had fallen out of touch for some years.

But a strange thing happened.

In the first months of 2014, he began to cross my mind periodically. These occurrences were fleeting; I didn’t hang onto them or wonder why.

In early April I went to Ohio to visit my folks, still living near Dayton. As soon as I arrived I had an overwhelming compulsion to find Chief Hawk—if I could—and reconnect.

I googled his name and discovered his life had taken quite a turn in the 1990s and later. He’d provided vocals for one of the scenes in the movie Dances with Wolves and been extensively involved with the PBS documentary mini-series 500 Nations. In the book Imagining Native America in Music author Michael V Pisani wrote of the musical language he used in the documentary: …the singer Chief Hawk Pope relied on this melodic cadence to underscore moments of great sadness and tragedy such as the Trail of Tears sequence. I also noted he’d been on tour with Spirit the Seventh Fire, a multi-media production conceived by his friend Peter Buffet, with music written by them both. And the Shawnee Nation United Remnant Band now had a home on original Shawnee land, previously lost as a result of genocide advocated through the Indian Removal Act, purchased back by the Tribe.

I found contact information for the Tribe through their Facebook page and sent a private message explaining who I am and that I’d like to reconnect if Chief Hawk was interested. I got an immediate response from one of the Tribe asking me to come to the Zane Shawnee Caverns, on Shawnee land, a few days later for a meeting. Prior to the appointed day, my mom and I ventured out for a day of sightseeing and got hopelessly lost in an area of Ohio unfamiliar to us both. We ended up in the tiny town of Zanesfield looking for a museum we were told was at least 100 miles north. A few days later on the way to my meeting with Chief Hawk, I was astounded to end up in the very area my mom and I got lost, indeed going right through Zanesfield and drove just a few miles beyond!

I really had no idea why I received inner direction to initiate the request I did. I merely followed that strong, not-to-be-disregarded energy. When I walked into the Zane Shawnee gift shop for our reunion, it was evident that I was supposed to be there. The reconnection was powerful for us both. Beyond that day, I returned to spend another in deep conversation prior to my departure on other travels east. We agreed we’re going to work together—although neither of us know exactly what that means at this point.

Before I left I told Chief Hawk about my unprovoked thoughts of him coming to mind the months prior…then the inner urge to initiate a reunion…even getting lost in the countryside near Shawnee land…when I had no idea they were there.

He looked intently into my eyes and said, “Well, I’ve been throwing out a net these last months.”

Below is an open article written in 1998 to his People in Tosãn Shawandasse, the official voice of the Shawnee Nation United Remnant Band, beautifully illustrating elements of intent and belief.* What Chief Hawk doesn’t expressly share is the tremendous sacrifice he has borne through his 40+ years as chief since taking on this spiritual responsibility as a young man, given to him by his grandfather.

While directed to the Shawnee People, any of us can take heart and guidance here. His words are truth. 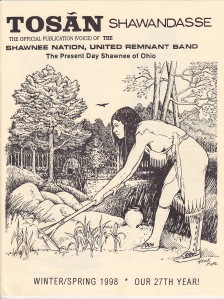 Some Dreams Do Come True

In order for a dream to come true, all it takes is the following:

– Believing you can meet that need even if that only seems to be a dream.

– The courage to go for it, knowing you could lose.

– Work as hard as it takes to make it happen.

– Get as many of the People as you can to make a team that can do the job.

– Do all you possibly can, knowing that if you truly do that, Creator will take up where your abilities leave off.

– Convey your hopes, dreams, and needs along with your love and respect to Creator and demonstrate that you are still His Children (The Shawnee). This you do in the way He left for us, the ceremonies.

– Rise above the criticisms and stumbling blocks thrown in your way by the petty, evil or just those much smaller than the dream. You can’t let their fear become yours, their criticism or lack of support shake your faith, or their jealousy pull you down.

– Stay the course, no matter what.

– Be grateful for each blessing, each dream come true, and never forget that your efforts were only half of what made it happen. Sometimes we come close to losing our way. Sometimes we allow ourselves or others to be part of a problem and not part of the solution. If this happens, we lose the blessing. We don’t meet the need. We give up the dream and we just plain lose. So far, by following this plan and philosophy, we have accomplished the following:

— 1970: Reorganization of the people of the Remnant communities and reformation of the Shawnee Nation, United Remnant Band.

— 1974: Formed an interim core Council and moved back to Ohio homeland.

— 1980: Gained State recognition as the descendant Tribe of the historic Shawnee in Ohio.

— 1985: Constructed our first Great House since historic Lower Shawnee Town on the Scioto.

— 1992: Built the community center, road, electric and well on Shawandasse. The Great House was moved to Shawandasse and original dress brought back to ceremonies.

You are invited by Chief Hawk Pope to visit Shawnee lands located at Zane Shawnee Caverns near Bellefontaine, Ohio. See their website for information on Pow Wows, camping, cave visits and other events and developments on Shawnee lands since 1995.

* Reprinting of this open article was used with full permission granted by Chief Hawk Pope.