A star shines more brightly now. A week ago I received word that Don Miguelito—pa’qo and ever-present guardian of Salk’awasi—transitioned this planet and took his place in the sky.*

I write this to honor him. He touched a multitude of people, both literally and figuratively, in his 90-plus years. For sure, all the people who traveled with me in Peru will not have forgotten him. Memories of him are carried within us. 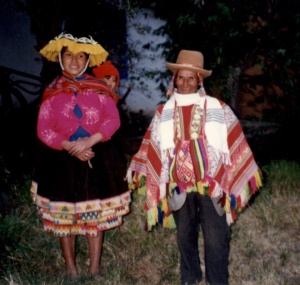 Looking back I realize the many things I learned from him over the years. I never knew the kind of things that are common if we’ve known someone long: his last name, if he’d had a wife or children, if he was born in the village of Mollamarka above where he’d lived. He was a solitary fixture, sometimes appearing in front of his small adobe, hand in his coca bag, when visitors arrived at Salk’awasi. Watching.

But I did know that witches from the small village on the next mountain made their way over to consult with him periodically. We called him Miguelito, an affectionate diminutive, which did not at all express the power he held. Although, it did note his small physical stature. I’d be surprised if he’d brushed 58 inches. He did not demand recognition as some do. He was not flamboyant. He spoke few words. Yet, if you paid attention, you’d be aware of the teachings he conveyed.

If you were fooled by appearances, you’d think he was the gardener. In worn, simple clothing, we’d see him raking one of the many paths that wind through the compound with a handful of branches. He built magic ‘rooms’ where given opportunity by a fallen tree and nearby vines to drape. He kept the flowers 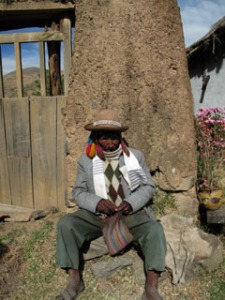 neat. In his last years, he tended them less. The land suffered his absence, going back to nature—perhaps symbolizing Miguelito’s own symbiotic journey. Nevertheless, he touched the Pachamama, Mother Earth, and created sacred containers, leaving his imprint on the land that will never dissipate.

It was only during certain times that his outward appearance gave a hint of who he really was. We would invite him to the circle. He would come—always at night—dressed in full regalia: brightly colored poncho and hat, carrying his mesa.** We’d make sure he had a small table on which to open his mesa, candlelight and pisco to refresh himself. Contained in his mesa were coca leaves for divinations and smooth black stones that had been struck by lightning. He used them for limpia.***

Miguelito had been struck by lightning himself—twice—a known shamanic initiation in many indigenous traditions. He ran his lightning stones over our bodies removing hucha, or heavy energy.

His coca readings were spot on, seeing things in us that we needed to attend to in order to further the journey and foretold futures perhaps not even a blip on our own radar yet. The coca leaves told him so. My own first experience with Miguelito is forever emblazoned in my mind. I was a real newbie, not really knowing which end was up, feeling my way on an invisible-to-me path. I wrote about it in my first book Calling Our Spirits Home. A bit is excerpted here.

Miguelito was bent trance-like over the leaves, sifting them with his gnarly fingers, muttering under his breath…he picked up a few coca leaves and began chewing them…he spit them out on the table. Moving his hands…he seemed to be noting where the pieces fell…he began to speak…Stopping, he turned and looked me directly in the eyes as though searching for something…Miguelito’s words [translated from Quechua] seemed quite unlikely to me. ‘That storm we had the other night?’ I nodded. How could I not recall it? I had started awake in the middle of the night…Lightning lit up the room from its savage dance across the mountaintops right outside my window…’The lightning was for you and its filaments are inside you now. I’m surprised that it was for you.’ No more surprised than I was, unclear of his meaning…Abruptly, he got up from his chair, came over to me and started rooting through the hair on top of my head with his fingers. ‘Ah, there’s where it went in.’ Seeming now satisfied with his finding he sat back down.

He went on to tell me of the work I would begin to do, a large part of it bringing groups to Peru with spiritual intent. That was in 1996. Indeed, the reading held true and has evolved from there to include other Indigenous traditions and countries. The last reading I had with Miguelito was in 2011 when he told me that my work would continue to be difficult. This was not something I wanted to hear but recognized what is typically so when anyone is going against the grain of the status quo and mainstream culture. My intent is in holding the challenges lightly.

Miguelito was not afraid of being blunt. In fact, he used no filters in advising what was causing obstructions. Sometimes I saw people wince. It was always interesting to me in that the same issues would come up for the person to deal with during our travels. He also instituted healings. I wrote of one in the recent post Collective Resonance and Healing how the jungle absorbed a woman’s chronic condition.

He was often out in the dead of night. Perhaps he was communing with the mountains, stars and planets, perhaps spirits that best showed themselves in the wee hours. Now he may show himself in just that way.

On June 23rd I wrote my longtime friend Oscar Panizo and told him of the news none of us wanted to hear. He wrote back, “The glaciers are melting and the times are a-changing. Salk’a energy is returning home.”

*Paq’o is the word for shaman in Quechua. Salk’awasi is the ancestral home of Peruvian mystic Don Américo Yábar. Salk’a means undomesticated energy. Wasi is place or house.

**Mesa is the Spanish word used for medicine bundle.

***Limpia is the Spanish word used for rituals working with clearing energy in and around the body.

15 thoughts on “In Memoriam: Don Miguelito – Paq’o and Spiritual Guardian”