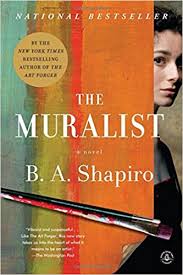 I read B. A. Shapiro’s bestseller The Art Forger when it came out and enjoyed it immensely. When art is the backdrop against a true-life story, and I can learn something along the way, I’m automatically drawn. So when I stumbled upon her next novel, it was a shoo-in that did not disappoint. Plus, I became aware of shameful things in US history that certainly have been downplayed, but absolutely relevant today. A horrendous part of French history is also enlarged upon beyond what I’d known. These two areas are largely why I’m reviewing this historical novel here.

The storyline is introduced in present-day when art historian Danielle Abrams, working for Christie’s auction house, received boxes of paintings to research and authenticate. Knowledge and gut feeling told her they were likely Abstract Expressionist pieces, potentially pre-WWII. She felt the stirrings of excitement, a possibility arising. Could they be early works of renowned Abstract Expressionists? With that, her thoughts turned toward her great-aunt Alizée Benoit, the family legend and mystery surrounding her. In the first stirrings of WWII, Alizée had moved to New York for the sake of her art, leaving her Jewish family in France. Family stories had it that she somehow became connected with Lee Krasner, Jackson Pollock, Mark Rothko and others, little known at the time, and played a significant influence on these giants in the Abstract Expressionism movement and their styles.  But suddenly in 1940 she disappeared. No one knew where or why. Attempts led nowhere and there were whispers of mental illness. Only two of her paintings remained, given to her US family by a patron.

An unexpected find that she believes was somehow connected to her missing great-aunt causes Danielle to undertake her own search to resolve the mystery. We are ushered back to the late 1930s, a couple of years after Alizée’s arrival in New York, as she is making her way in a country critically affected by the Depression. By this time, she is working for Works Progress Administration (WPA) Federal Art Program (FAP) on murals, destined for public sites like government buildings, train stations and the like. She rubs elbows with serious artists of the time, and becomes part of the close-knit group that include those mentioned. The narrative follows Alizée as they work and practically live on top of each other, arguing about art and loving in the midst of uncertain times.

In the meantime, the threat of Hitler becomes more and more real. Alizée’s close and extended Jewish family in Europe enlist her to help them apply for US visas to escape the tyranny as it becomes increasingly dangerous and communications diminish. The one bright point in her life is art and the unforeseen patronage of Eleanor Roosevelt, a champion of the FAP.

Alizée bumps up against block after bureaucratic block in rescuing her family. She learns that Breckinridge Long, the Assistant Secretary of State in President Roosevelt’s administration and an anti-Semite, was actively withholding granting of visas to Jews seeking to escape Nazi Germany, stating they may be criminals and spies. President Roosevelt, for his part, turned his head away from this matter as too politically sensitive.

Rumors of the Vichy government’s collaboration with the Gestapo, police raids in Paris, where her family lived, and transfers to a “holding camp” an hour away by train trickled through. Becoming more and more desperate, Alizée found no recourse but to join a dissident group and take drastic measures.

Danielle’s painstaking search for the fate of Alizée Benoit uncovers answers, piece by perturbing piece, that bring resolution from the past to the present.

B.A. Shapiro was faithful to documentation of the bohemian and sometimes tragic lives of the Abstract Expressionists, WPA/FAP and Eleanor Roosevelt’s support of the arts, which I found quite interesting. More so, she built a poignant story against the terrible landscape of politics, war and genocide of those times…some of which sound all too familiar today.

Here are the facts.

Ultimately, the effect of the immigration policies set by Long’s department was that, during American involvement in the war, ninety percent of the quota places available to immigrants from countries under German and Italian control were never filled. If they had been, an additional 190,000 people could have escaped the atrocities being committed by the Nazis.

The Drancy camp was designed to hold 700 people, but at its peak held more than 7,000. There is documented evidence and testimony recounting the brutality of the French guards in Drancy and the harsh conditions imposed on the inmates…upon their arrival, small children were immediately separated from their parents for deportation to the death camps…

Of the 75,000 Jews whom French and German authorities deported from France, more than 67,000 were sent directly from Drancy to Auschwitz… As the Allies were approaching Paris in August 1944, the German officers fled, and the camp was liberated on 17 August when control of the camp was given over to the French Resistance and Swedish diplomat Raoul Nordling…

Eleanor Roosevelt’s son James told historian Doris Kearns Goodwin that the greatest regret of his mother’s life was her failure to convince her husband to admit more European refugees to the United States before World War II. Her lament is a warning to all of us.

The Muralist is available in print, audio and ebook through Amazon and wherever books are sold.