Book Review: Acedia and Me – A Marriage, Monks, and A Writer’s Life 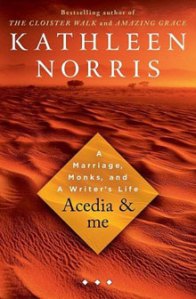 If you are one of those people who is unrelentingly committed to a path, particularly one that the world may little understand, and yet you have periodically fallen into doubt, there is actually a name for this affliction – much to my relief. Doubt is not really a good word for a state that can reach a level of deep despair and sense of futility. And yet it’s not depression in the clinical sense.

Acedia was included in the “eight bad thoughts” of the desert monks but was later inexplicably dropped when translated into the Catholic Church’s “seven deadly sins.” If only over the years I would have had a word for it, not as a sin but as a thought that can assail a person who has monkish tendencies or artists, advocates and others who probe the edges of convention. Then there could have been a level of comfort and normalcy in the experiences. But instead, the term and understanding of it was dropped into time, to be hidden in little known annals or diaries of people who had the courage to express it.

Kathleen Norris has done many of us a favor by writing a book about acedia, giving many personal examples and historical references. Taken from the book, “… the monk struggling with acedia is dealing with more than bad moods, psychic fluctuations, or moral defeats. It is a question of resolve that arises in the wake of a decisive choice for which the monk has risked his life’a danger to anyone whose work requires great concentration and discipline yet is considered by many to be of little practical value…”

Along with the author’s own writings, a real plus is in the last chapter, a collection forty-odd pages long of quotes, personal experiences from such luminaries as John of the Cross, Emily Dickinson, Petrarch, Dante, Evelyn Waugh and many others. Sometimes it helps to name something and I can sense a future essay of my own percolating. Read a Q&A with the author, plus an excerpt.

You may recognize the author’s name from her other books such as The Cloister Walk and Dakota: A Spiritual Geography. Read this latest book if your path has ever taken you into an unnamed state that may be acedia—or if you anticipate it could.

Available on Amazon and elsewhere.

Topics here are meant to open conversations and self-reflection. For more information, go to the "About" page.
Join 1,720 other followers