Lineage: Calling on the Ancestors

The nondescript address promised little from the street. I opened the old wooden door to slip through the walled entryway and found otherwise. Carol Karasik and I had arranged with the group to meet at Laughlin House, one of the oldest houses in San Cristóbal de Las Casas, then owned by anthropologist Robert Laughlin and his wife Mimi. Carol had been staying at the venerable hacienda—and, with all its rustic charm and lush garden, it seemed the perfect place for our evening gathering.

Dusk was coming quickly. I wandered through the narrow, uneven paths admiring the beauty of the garden, down to the small greenhouse at the far end. As I passed by the main house I noticed a woman kneeling in the grass separating the dwelling from the garden. She was carefully digging a shallow circle, exposing the dirt, already preparing the space. Copal smoke rose from the pedestal burner.

Floridalma (Flori) Pérez González, a traditional  Ajq’ij, a Maya Daykeeper from a Mam village in the mountains of northern Guatemala, was there to offer us a fire ceremony, so sacred to her people. As the rest of the group drifted in, she invited us to join her and sit in circle. We watched in silence as the altar grew on the bare dirt: sugar drawn in a symbol reflecting the day in the Maya calendar, fist-sized balls of resin mixed with shredded wood, candles laid in a circle as offerings to the Nawals, Day-Spirits of the calendar, and Four Directions, sticks of pine pitch, rose petals around the perimeter. 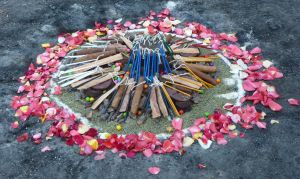 By this time it was dark, just the glow from the incense burner reflecting on our faces; we were cocooned, a timeless place separate from the everyday world. Flori spoke softly and asked me to express the collective intent of the group, then invited each one in the circle to offer their individual words. She lit the fire and invoked the presence of the spirits, praying intermittently in her Maya dialect and Spanish. 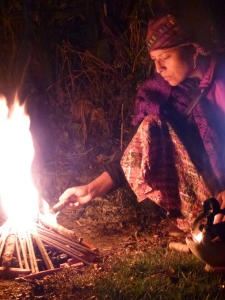 The fire’s flame rose. She called on the Nawals and Ancestors, Grandmothers-Grandfathers, inviting them to accept our petitions and blessings through the smoke. Every now and then she reached her hand into a bag and threw herbs upon the flames. The fire changed shape, moving against the light breeze, not with it. Flori told us the meaning and said it was a good sign. We were drawn into her soft prayers, the flames and, otherwise, the stillness.

After a time, she passed thin, white tallow candles asking us each to take eight, then instructing us to separately approach the fire and, as we settled the candles one by one into the fire, call out the names of those who have gone ahead of us, our Ancestors, to welcome them to our circle, to bless them, as they who are part of who we are, to hear our prayers.

I started. In that moment, I realized that I knew so little about my own family line—but a few names, not nearly enough for the candles I held in my hand. I attempted to sweep the corners of memory to see if anything arose. It didn’t. And when it came my turn to kneel at the fire, beyond three names I could name no more. I placed the remaining tapers, intending they would find their match.

But sadness arose; a hole was uncovered. I didn’t know My People.

I recognized then one of the reasons I’m so drawn to Indigenous traditions. Upon introduction, a number of Wisdom Keepers I’d met would identify their villages and clans going back a few generations. I’d been told that the purpose was to offer any mutual connections. But it’s also a clear statement of identity, place in the world. Those who maintain their traditions are grounded through lineage, lending spiritual strength. Hearing these pronouncements always stirred something poignant in me, as though I was attempting to reach out, to find my own conscious grounding. But I had none in that way, not of the blood that ran in my veins, the places My People had walked, or what aspects of them resonated through time to find residence within me—beyond my own mother and father. I discovered I wasn’t alone. Several of the members of the group struggled in their own way. It was a powerful ceremony. 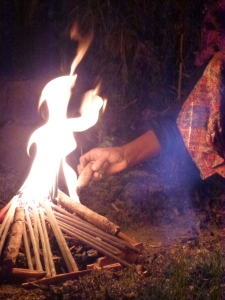 It is said that the fire works on you over time.

Its work with me began immediately. I emailed my folks the next morning mentioning the intent of the fire ceremony and my sadness for lack of knowledge of the family line. My mother wrote back saying, “It’s strange you should mention this because yesterday we started cleaning out old boxes…and found papers tracing your father’s family tree!” One of his distant cousin’s had undertaken the search years ago. The papers had been forgotten. We were both astounded at the timing of their urge to clean. I asked my mom if she’d begin looking into her line; she had little knowledge either. She promised she would.

Tracking genealogy is something of an art, sometimes an endless maze with dead-ends, particularly if you have little information at the outset, or experience. My mother got discouraged, having come up with few leads, after much time spent. The project stalled.

When I visited my folks over Thanksgiving, we talked of family line again. Don Boyd is an old family friend who has become something of an expert in tracing genealogy. I contacted him to see if he would be willing to give my mom some pointers. I then left for my Maya spiritual travel programs over the next two months.

Immediately, there was a flurry of emails between my mom and Don, with copies to me in Mexico and Guatemala. In no time flat, Don was able to produce information that led to a fairly extensive maternal family tree. Although some of the data petered out, thanks to Don and my dad’s distant cousin, I now know most of my lineage.

We still don’t know anything about my dad’s maternal line. But, for the rest, My People were all from the South. My paternal grandfather’s line traces back to 1724 England—and, a curious aside, includes Arthur Woody, the “legendary barefoot forest ranger” one of the first pioneering forest stewards in the US. My maternal grandfather’s people go back to 1766 Ireland. Cherokee lineage exists on both my maternal grandparents’ sides, for sure one documented to 1867 North Carolina. There’s a possible trace of another Cherokee ancestor as far back as 1797 Tennessee, but that one is difficult to prove. 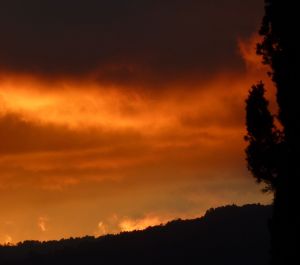 Less than a week ago we met Flori at dusk. The fiery sunset announced the fire that would be lit in ceremony on the ground, perhaps already mirroring back to us our prayers that would rise. And when it came my time to approach the fire and lay the tapers, I called on my Ancestors, My People, clearly by name. I’ll never know all their stories but I can now intuit their lives—and feel their influence on me, rising up through time, running in my blood, to my place in the world.

I am grateful to the fire. 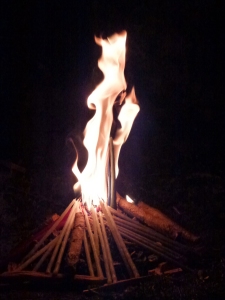 3 thoughts on “Lineage: Calling on the Ancestors”