Book Review: Quiet – The Power of Introverts in a World That Can’t Stop Talking 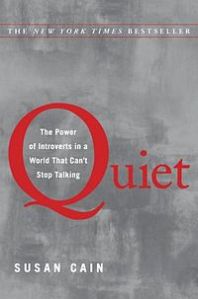 People are often surprised when I say that I’m an introvert. They’re fooled by the fact that I’m articulate, do public speaking, work with groups and engage socially. They assume that I’m an extrovert. I can do the things I do because I’ve arranged my lifestyle to support my biological make-up and preferences. I love to engage when they’re things I care about deeply—BUT I retreat to regenerate myself. Whether you lean toward introversion or extroversion primarily has to do with how you expend your energy and the way you renew it.

However, our culture values extroversion. There must be something wrong if you’re not talking: You’re secretive, have nothing of value to contribute and probably not so bright.

As a child there were countless times when I heard I was “too quiet.” Not by my parents, who are also introverts, but mostly by teachers, causing me to retreat even further into my inner world. As a teenager, it was even more hurtful, especially when it came from friends. All that input translates to: You’re not good enough. It haunted me for a long time.

Indeed, your biggest challenge may be to fully harness your strengths. You may be so busy trying to appear like a zestful, reward-sensitive extrovert that you undervalue your own talents, or feel underestimated by those around you. But when you’re focused on a project that you care about, you probably find that your energy is boundless. – From Quiet.

Later in life I have often been called “intense” as though something is wrong with that as well. But by the time I heard it the first time I’d begun to value my own sensibilities and could translate the meaning to “passion.” And the years I worked in a corporate environment…meetings were my most dreaded activity. Those who were most vocal blathered on saying nothing. It was an effort for me to keep in my seat. I wanted to jump out of my skin and flee.

Author Susan Cain has gotten a lot of play in the media since Quiet was published in 2012. It’s been on the bestseller list for many weeks running. Nevertheless, I didn’t know about it until I was perusing my local library for CD books to accompany me on a recent road trip to Utah.

I’m writing this review for those who missed this important book like I did. Whether you’re more introverted or extroverted, Quiet contains highly useful information for valuing both preferences. It also contains data on biological differences and distinctions of introversion. If you’re an introvert, it cites numerous studies and other pointers that will validate your value. If you’re an extrovert, it will help you understand the many introverts around you. I was horrified at one story about two extroverted parents who sought psychiatric intervention and medication for their introverted child. When one psychiatrist found the child to be normal the parents moved on for the next opinion.

My most transformative experiences have never happened in groups. That said, there is extraordinary energy that builds when groups entrain to strong spiritual intent, kickstarting a process of opening. Then integration comes through balancing the internal and external. That is the premise underlying any retreats and spiritual travel programs I sponsor.

The highly sensitive [introverted] tend to be philosophical or spiritual in their orientation, rather than materialistic or hedonistic. They dislike small talk. They often describe themselves as creative or intuitive. They dream vividly, and can often recall their dreams the next day. They love music, nature, art, physical beauty. They feel exceptionally strong emotions–sometimes acute bouts of joy, but also sorrow, melancholy, and fear. Highly sensitive people also process information about their environments–both physical and emotional–unusually deeply. They tend to notice subtleties that others miss–another person’s shift in mood, say, or a light bulb burning a touch too brightly. – From Quiet.

The quote below was quite interesting to me. Such practices don’t just occur in Evangelicalism. I’ve personally had experience of being expected to utter prayers and entreaties out loud while in sweat lodge and other ceremonies, although not as common. I remember the first time it happened I was shocked at the intrusion on my privacy in a spiritual setting. To me, such things are so sacred they’re not pronounced aloud. Of course, the leaders didn’t see it as an affront. Now, if such a thing occurs, I pass to those who want to speak these things out loud and remain comfortable with my own way.

Evangelicalism has taken the Extrovert Ideal to its logical extreme…If you don’t love Jesus out loud, then it must not be real love. It’s not enough to forge your own spiritual connection to the divine; it must be displayed publicly.

There is a compilation of quotes for the book on Goodreads. Ultimately, this is the teaching of the book.

There’s also an excellent TED talk by Susan Cain giving an overview. Quiet is available on Amazon and elsewhere in print, ebook and audiobook.

One thought on “Book Review: Quiet – The Power of Introverts in a World That Can’t Stop Talking”