When the Dream Just Isn’t Enough

I’ve just started reading Gloria Steinem’s new memoir My Life on the Road…and I’m held. Its grasp started with an excerpt on the jacket flap.

When people ask me why I still have hope and energy after all these years, I always say: Because I travel. Taking to the road—by which I mean letting the road take you—changed who I thought I was. The road is messy in the way that real life is messy. It leads us out of denial and into reality, out of theory and into practice, out of caution and into action, out of statistics and into stories—in short, out of our heads and into our hearts.

Steinem is now in her 80s…and she still travels. She writes how the word ‘still’ entered her life when friends would say: So you’re still traveling? As if it should have a timeline on it. It all started in childhood when her father would consistently throw the family in the car and take off cross-country to discover what they would find.

Reading just these first several pages is causing me to reflect on my own life—my own odyssey that has brought me to where I reside now…on the road…returning to ground the experiences at home for a few months or less before resuming.

It occurs to me that many of us need to be given ‘permission’ to travel, to step out of the comfort zone called home. I mean travel in the sense of journey…not as a tourist but to viscerally experience the land and people…to take a risk…to open your mind. It’s not a crazy or frivolous pastime. I’ve traveled in 31 countries and 35 US states. A good number are still on my list. The road is also in front of me. I’ve made friends and created deep relationships. I’ve gone places few venture—over and over.  Many have entered my bloodstream and reside in my heart: shaping my lifework, writing and art. Probably other expressions as well.

It’s my way of life: my choice. But my introduction was not unlike Gloria Steinem’s.

Both my folks came from a small town in East Texas. Neither had been exposed to other ways of life outside their geographical area but were well familiar with tough times. I think it must have been the need for more than just survival that initiated their leaving. My dad joined the Air Force not long before I was born. Within seven years we moved four times. But the big one that opened the road for me was our move to Paris for nearly five years. By that time my dad had become an attorney, speaking French with his Texan accent, defending GIs in French courts.

On our way to Paris.

My father had a place to go to every day, an office and colleagues. My mother didn’t. I put myself in her place and what it must have been like for a small town girl who spoke no French to step on the Metro, alone with her child in hand, and travel like any other Parisian in that big city. We did it consistently. I have distinct remembrances. Some of my fondest memories of childhood and adolescence are traveling through the Spanish and Italian countryside, a month at a time, and all the shorter trips as a family we were able to make, wandering the streets in tiny villages, eating unfamiliar food, hearing languages strange to my ear. This is one of the biggest early gifts my parents gave to me—curiosity and appreciation—even though I’m sure they didn’t realize it at the time.

After we returned to the US, I was stationery between the years 14-17. But ventured out after high school graduation to make the requisite trip to Myrtle Beach and the Smoky Mountains, my mom going with me after a friend pooped out. Then at 24 I moved to Tehran to work for six months…and I’ve been on the road ever since. 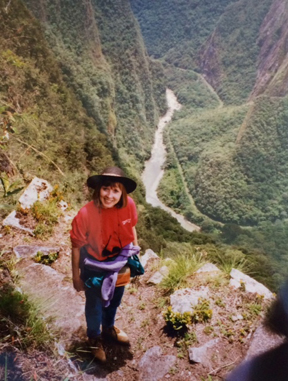 I could never be just an armchair traveler, dreaming of the journey but never embarking. Obstacles? That’s just the mind creating distractions, attempting to keep you mired in the status quo. It’s a signal of being on the threshold, especially so the louder the internal dialogue. But if you move through your fear—however it presents itself…thoughts of financial scarcity, overwhelm, safety concerns, the myriad rationalizations—ahhh…there the journey presents itself.

When I started this blog in 2012, I posted Spiritual Travel: Destination or Process? which I originally wrote for my newsletter around 2005. I find it still to be true today…and more.

2 thoughts on “When the Dream Just Isn’t Enough”