Several months ago, I was listening to Elizabeth Gilbert’s 2016 interview of Neil Gaiman on her podcast Magic Lessons discussing the creative process and other people’s expectations. If you’ve done something they like, they want you to repeat it. They don’t want you to surprise them with something else. The gallerist who wants a body of work. The publisher who wants a genre. No matter the author has a history of bestsellers. Write outside the genre they’re known for…and the publisher isn’t interested. What they’re really saying they want is consistency without risk to the bottom line…marketability.

Gaiman told a story. There are two types of writers: dolphins or otters. Dolphins are very good at doing tricks a trainer wants them to do — in exchange for a fish. They’ll do it over and over again. There’s some banter about the dolphin living in captivity and being very good about training the trainer to get what the dolphin wants. It all sounds like manipulation to me.

Then there’s the otter. No one can train an otter. Why would you want to do the things you just did when there’s the next thing to be done? That’s why there aren’t any otter shows…

It’s plain to see Neil Gaiman is an otter, quite the successful one. He’s readily described as a prolific creator of works of prose, poetry, film, journalism, comics, song lyrics and drama.

Consistency — in the terms it’s meant by gallerists, publishing houses and art collectors — bores me to tears. That’s why I took a long break from oil painting. I’d done it off and on across nearly 40 years, with long pauses, until I just couldn’t stand it anymore. But the creative urges kept calling. So, I took up writing. Quite the divergence.

In hindsight, that was the point where I gave myself permission to be as diverse as I liked, and wish I’d done it much sooner. I’ve been so much happier ever since. It matches my nature, and I’ve never done well with attempts to box me in. I refuse to create in a formulaic manner. Fine for others. But for me, it would dull things down and dispel any feelings of awe the process can bring. 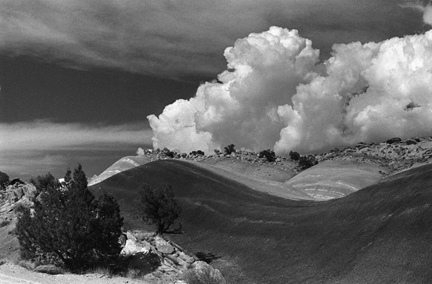 My return to visual arts, finally, was black and white photography. It had always fascinated me. It was emotive. With tips from a photographer friend, I purchased a manual camera and began shooting black and white images. A few years later I discovered mixed media. By virtue of its very name it encourages exploring, combining things in ways to make it more than it would otherwise be using one lonely medium.

Here at long last I’ve found a home. What it took was making the decision to create in the way that was most inspirational to me, not by the dictates of the outside world. 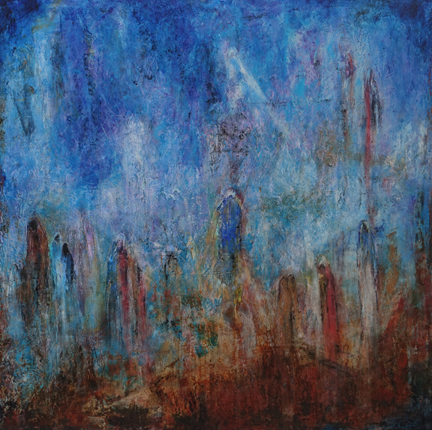 The Ancestors Speak to Me Mixed media on wood cradled panel. ©2018 Carla Woody.

Second, after study about such things, I recognized how my mind works and why I rejected the formulaic method often preached. I accepted my difference instead for the formula my mind came up with that produces efficiently for me more often than not.

I Hold the Keys Mixed media on canvas. ©2019 Carla Woody.

My personal strategy is in first creating the vision in my mind — the outcome — then gathering up piece parts, considering fit of different media, combining them in such a way most likely to induce the effect I envision. It’s a consistency I can abide by, and it’s rarely the same twice. The strategy isn’t step-by-step and usually not conscious, but a flow when functioning well.

But the most important thing I found? I said it earlier. Giving myself permission to hold the inspiration and strike out beyond any confine. Here is the same thing said in another form of mixed media.

One thought on “Retrospective, Part II”