The Churning, the Empowerment

Sometime in the fall an idea began to form that I would participate in the retreat taking place at Garchen Buddhist Institute over the turning of the new year. It was called their Winter Event—with Garchen Rinpoche and Lamas—for the Long Life Ceremony, Mahakala Empowerment and Bodhisattva Practices. I was actually surprised when the thought arose. I hadn’t been drawn before and knew absolutely nothing of Tibetan Buddhism. But somehow it seemed clear to me I was supposed to be there, so signed on for three days of the seven.

As the raven flies, Garchen Institute is about ten minutes away from my home. But because of the dirt roads between my place and theirs, it takes me about four times that to get there. As my first attendance day approached, I decided I’d better do a dry run to see if I could find it. I’d been out there about seventeen years ago, a few years after it was established, curious to see what was there. It’s fortunate I went with a friend then who had a vague idea where it was because it felt like we were lost for sure. But finally, all those years ago, there was a tiny sign indicating where to turn.

This time, on my dry run, I was alone and took my GPS which turned out to be no help, trying to take me down a cow path and then in the opposite direction, which I knew wasn’t right. It occurred to me that such places need to be hidden in a certain sense. When I did find my way, prayer flags were flying and it was clearly marked. But no signage along the way.

I arrived that first day knowing nothing, which for me has usually worked out best. Little to entangle my mind, and the staff was kind in advising me of basic protocol—no shoes in the temple—and showed me to my place on the floor for the next few days.  I also did not know…

“His Eminence Garchen Rinpoche is one of the foremost Buddhist masters and accomplished Tibetan Lamas alive in this world today.” Instead, I began to know so by his overwhelmingly compassionate presence when he first entered the room, something maintained throughout my experience there.

I had a rough time the first day. For years I’ve been able to sit cross-legged, straight-backed without support for hours without discomfort. One time in the middle of another retreat a long time ago, it just suddenly happened, like I was planted, and had continued ever since until this time. Every muscle in my body ached, and my right leg was restless. My mind wandered from the Lama’s teachings, and I kept fidgeting. I wasn’t able to follow what was presented. Frankly, I couldn’t wait for the day to be over.  But overnight something happened. I can only believe I’d been experiencing unconscious resistance in the face of something profound. In order to shift, there’s always conflict between what was and what is coming into being.

Over the next two days, the gentle smiling presence of Garchen Rinpoche, the chants and ceremony took me, culminating with the Mahakala Empowerment. Again, I had no idea what was coming. For me, the teachings were complex. Better to overwhelm my mind with. One of the nuns passed out a card to everyone with an image of a very scary looking deity. It was from the two-armed Mahakala, through Garchen Rinpoche, we were to receive blessings and the empowerment. I only understood this Mahakala to be one of the protector bodhisattvas.

People began to get up from their places and line up. They all had white silk scarves draped over their outstretched arms, seeming to appear out of nowhere. I touched the woman in front of me and told her I was unsure what to do as I didn’t have the length of silk. She smiled widely at me and said, “Yes, you do! I’ll pass mine on to you.” People were so kind. Then suddenly I was standing in front of Garchen Rinpoche. He took my face in his hands and touched my bowed head. One of the Lamas threw the silk scarf around my neck. I felt something. I was passed from one Lama to the next accepting sacraments from them in the form of a seed to swallow, dribbles of juice and a packet of seeds to keep. Somehow, I made it back to my place, closed my eyes, engulfed in energy. A few times I opened my eyes slightly to gaze at the Mahakala image on the card and close them again, as we’d been told to do. Then something completely unexpected happened…and I sat with it for days before I even attempted to express it to a couple of trusted friends. I’ve found that sharing such things, once I’m able to articulate them somewhat, helps to ground them.

The retreat went on for a few days but it was the last for me. I emerged from that sacred space to hear that Trump ordered the murder of Iranian General Suleimani, that we were on the precipice of war. And it broke me apart. My great sadness and horror that yet another thoughtless act could be perpetuated by this president. The contrast was just too great.

Today I listened to Justine Toms of New Dimensions Radio interview mythologist-storyteller Michael Meade discussing Recreating the World. It was timely and reminded me of what I already know. Meade says we’re in a place the Irish call the Betwixt and Between. I call that place the Edge of Limitation. The end has already happened. We’re in the middle of it. He calls this state the Great Churning, when things come up from the bottom, those things we’ve sensed all along but now clearly laid out in front of us. We’re faced with the cynicism of politics where so many of our elected officials don’t stand for the wellbeing of Mother Earth and all beings. But acting for the 1% and their own self-interest, bought by large conglomerates and the extremely wealthy with an agenda. We’ve lost our Innocence. We experience loss and tragedy.

At the same time, Innovation is also revealed in a multitude of ways, speaking to the possibility of unity, the potential of coming together. We must enter the Imaginal Realm, identified so by Henry Corbin, where we must dive deeply and attune to our true inner nature. Now is a phase heading toward Initiation, unveiling all that’s light and dark.

In the last minutes before I arose from the cushion where I sat eyes closed in meditation— removed from the world in the temple at Garchen—I had a vision. One so real and powerful that…even now as I write this…I feel chills.  There was a great pile of rubble and earth. It began to shake, to come apart. A terrible, strange being climbed out of the gaping hole…and came to stand squarely…in front of me. It was the two-armed Mahakala, protector, remover of suffering for sentient beings. He then vanished and, in his place, was a control panel of the kind in the cockpit of an airplane. 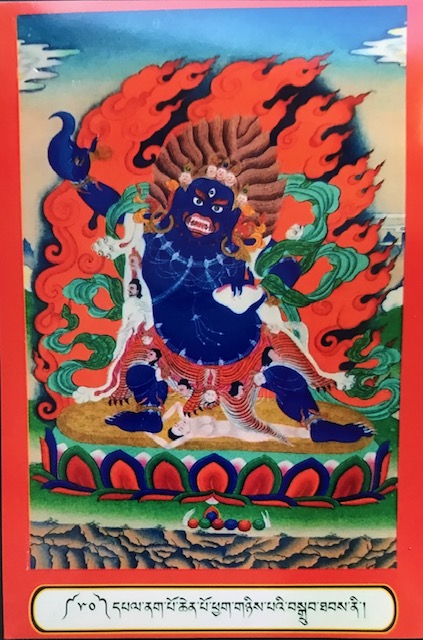 Initially, I was overwhelmed by this vision and remained that way for some days. Now I know it was a clear message and the empowerment…and not only for me.

Now is the time for all of us to make the choice…to journey on…to be leaders in this transition.

I’m reminded of walking the Camino Francés. By the eighth day of my pilgrimage, I was in a great deal of pain, my right foot having sustained a mystery injury. I shuffled along slowly, pulling myself by my walking stick. I was alone. I was in the middle of nowhere…somewhere in northern Spain…

The trail was pretty much empty. I just toddled on. Another older gentleman, this one French, checked on me in passing, “Ca va?” In the middle of nowhere there’s nothing to do but go on. He must have taken a break somewhere because later he whispered as he passed again, “Courage!”

—Excerpt from The Essential Way

4 thoughts on “The Churning, the Empowerment”