This is an excerpt of an article I published in 2006 about what happens when you leave “home” with intent; what can show up to inspire; and a bit about the beauty of the land and people of Chiapas, Mexico.

If I have an indulgence, it’s travel. On second thought, it’s not an indulgence at all, but one of the significant ways I care for myself. It serves as a gateway to wider experience of the world—and self-discoveries as well. These are intangibles I can bring home, like souvenirs, even if no one else can see them. But they won’t be put away in a drawer or gather dust on a shelf. Instead, they impact who and how I am in the world.

But it’s not just any kind of travel that has this effect. It’s the kind where I choose to step outside time. Having identified specific points in the calendar that the journey will begin and end, with a wide reach in-between, l just let go of any schedules or agendas. So strongly programmed by our culture to have both those things as absolute necessities of life, the residue may linger on for a bit until it clears completely. When the space vacates, it opens a portal toward untold treasures.

Over the years I’ve found myself drawn repeatedly to the Mexican state of Chiapas bordering Guatemala, particularly the Palenque area. The village of Palenque holds no real fascination. Stepping off the bus though, I did feel the familiar sense of anticipation. For as we headed out of town in a taxi toward our destination, climbing a bit in elevation, feeling the balmy air soothing my skin, a part of me sighed, “Ahhhh… home again.”

There was the dirt path alongside the road. Playing over memories of the many different times I traversed there, to and from the ruins, breaking out of the thick, moist rainforest from who knew where, or headed to Mayabel for a cold one in their open-air café, the screams of howler monkeys periodically punctuating the air in early morning or dusk.

The Palenque ruins, and those of Yaxchilán and Bonampak buried in the rainforest, contain a resonance, one captured through history and brought up through time. Unfortunately to me, things have changed and these places aren’t as obscure as they once were, but the vibration endures. Tourists who sprint through won’t experience it though. It takes lingering and opening to what these timeless places have to share. It takes immersion. Only then will they offer up their secrets.

The Lacandón Maya reside in this region in the depths of the Lacandón Jungle. Their appearance and form of traditional sacred rituals set them apart from the highland Maya. Their creation stories have the familiar ring of what we know from the ancient Maya of that area. For centuries they avoided contact with the outside world, continuing their practices and passing stories down through generations. They weren’t hidden enough. In the last several decades, like an infestation of fleas, missionaries and loggers descended. 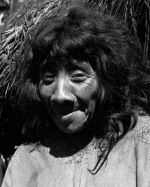 The central guardian of the ancient traditions was Chan K’in Viejo, the spirit holder of the Lacandones, living in the small enclave of Najá, a place, difficult to reach, in the heart of the Lacandón Biosphere. As the vast rainforest was whittled away around him, and more of his people were enticed away by Western trappings, he was steadfast in the virtues his tradition brought him. Quietly tending his crops, feeding the god pots with copal, leading the balché ceremonies and telling stories for those who would still listen, he held to the central truth. “The roots of all things are connected. When a tree is cut in the forest, a star falls in the sky.”

By the time he left this world in 1996 he may have sadly marveled there was any light left overhead so open was the view to the heavens! His great concern was also that the Lacandones would have no home and their ancient, esoteric tradition would no longer exist. (To link to a recording of Chan K’in Viejo speaking to his children in 1991, go here. The audio is in Lacandón Maya with transcripts also in Spanish/English.)

From the 1950s until her passing in 1993, Gertrude Duby Blom photographed many parts of Lacandón life, thereby documenting people and their traditions, nearly lost to us today. A deep friendship endured. Even today, should any Lacandones venture from their jungle homes to San Cristóbal de las Casas, they have lodging at Na Bolom, the House of the Jaguar. Once the home of Trudi and Frans Blom, it’s now a museum focusing on the life and traditions of the Lacandón Maya.

When my companion and I were in San Cristóbal, we visited Na Bolom, having lingered over the photos and ritual objects. I stood a long time in Trudi Blom’s small bedroom, looking at her personal items, gazing at her clothing still hung in a wardrobe, imagining what it must have been like to live her life.

People who stand for what they believe, living an un-prescribed life—unless it’s a prescription of their own making. They are fresh and enduring, even if their un-prescribed life is a secret they hold, unknown to the masses, one practiced alone or acknowledged by few.

Then there are the places in this world that have invoked inspiration for many. The collective energy is maintained through the intensity of the ageless offerings and the beauty of the land.

These things are food for the soul discovered through my own wanderings and with those who consent to accompany me.