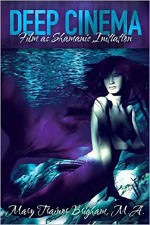 Mary Trainor-Brigham’s Deep Cinema deserves your time and attention. I found myself re-reading pages and then sitting, to give the words an opportunity to enter my interior space. Immediately evident, this is a book written to connect with your Indigenous Soul, as the author calls it, the one many of us ignore in this Middle World. She guides us to delve into movies and stories so that they play back to us our own humanity, initiatory passages and further potential.

I’ve studied Joseph Campbell’s work in-depth: his instruction on myth, the Hero’s Journey and places we can readily see examples in film and storytelling. Deep Cinema adds to that work in a way that makes it unique by overlaying shamanic templates from Indigenous cultures. We’re then offered the Soul Compass, a model …designed to transform life from a series of dogmatic dictates or chaotic occurrences…into a rich, sacred Self-defining sojourn which we gladly undertake…the key here is that life becomes meaningful…  The path from Child as Nest Dweller to Elder as Diamond Cutter and Pearl Spinner shows the gateways—mundane to spiritual, balance of Female as Womb Weaver to Male as Navigator—that we all must pass through in order to morph into the next level of growth.

The author brings her background as art therapist, film critic, actor and scriptwriter naturally into play, pointing out the metaphors in a multitude of films, older to more current, that relate to the archetypal templates she offers. With lyrical language, she draws the reader in. On the Voudon shamanic tradition: …According to the Haitians, a person’s small self is like a fish that gets hooked in the heart and reeled in throughout life by the love of and for their Great Self, sitting on a throne beneath the Sea in Lower World…

I was glad to see The Serpent and the Rainbow movie included as a failure at translating anthropologist Wade Davis’ book by the same name. Instead of portraying the rich layers of the Voudon traditions Davis experienced, Hollywood chose to further the cartoon-like, fear-based image of practitioners. Mary recommends Divine Horsemen: The Living Gods of Haiti as a true portrayal.

Once Were Warriors indicates the power of film on a population. In the successful translation of Alan Duff’s novel, Maori director Lee Tamahori graphically depicted real-life struggles with alcoholism and domestic violence the Maori people suffered, bringing it back to loss of spiritual traditions and the turning point of re-engagement. It’s noted that one in every three New Zealanders has seen this film. Most importantly: …after the film hit the theaters, there was an upsurge in the number of men seeking help with domestic violence issues, citing ‘Warrior Troubles’…

I had already viewed a number of the movies covered in the book: Whale Rider, Mindwalk, Capote and others. But I’m going to go back and see some again with new eyes and Deep Cinema beside me. As I was reading, I thought to myself it would be really nice to have an index of all the films and where they’re discussed in the book. I was pleased to find just that at the end. Bottom line: Deep Cinema is not just a reference but also an ally for the spiritual journey.