On the second day of our time on the Island of the Sun in Bolivia an opportunity presented itself. Local Aymara spiritual leader Mallku Roger Choque offered to take us to a closely held sacred place, one little known to outsiders where even few locals venture. The ancient ceremonial purpose of the site off the Island of the Sun was verified some decades ago when archaeologists found ritual artifacts on the lake bed at its base.

Clearly, this was another gift being handed to us. The first gift occurred the day before when sponsored Hopi guest Suhongva Marvin Lalo had discovered the Hopi migration petroglyph on a huge stone slab at the ruins of Puma Punku, outside La Paz—significant validation of the Hopi migration path. My spiritual travel group also included five sponsored Q’ero Wisdom Keepers making this journey to return to their Inka origins, as well as participants from across the US and Canada.

Given the cue by Mallku Roger we descended from the high point where we were lodging to the boat below. Not long after we headed out, waves washing behind us, this Aymara paq’o, or medicine person, laid a large weaving out on the floor of the boat’s front interior. Crouching down, he removed items from his bag. Soon it became apparent he would be leading a despacho ceremony, a prayer offering. Others squeezed around the altar, getting as close as we could in that cramped space. 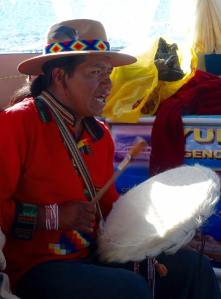 And a memory surfaced, one of being on a boat and, so much the same, engaged in despacho ceremony the previous year on a private journey with a few friends. But that time we had been leaving the Island of the Moon, ancient site of the Mystery School for Inka priestesses. And after our prayers were all placed in the despacho, and it was tightly wrapped, I was beckoned outside to the boat’s back deck. The package was placed in my hands. I remember standing, watching the waves recede as we plowed through the waters. Raising my hands I released the bundle to send it arcing over the waters. Time slowed down. It seemed to hover for a few moments before slipping into the lake…and some kind of energy was emitted. We all felt it. I tried not to engage my mind then about what it might mean, if anything.

I came back to the present as one of my Q’ero friends stood before me offering me a kintu for the Pachamama—Mother Earth—coca leaves in proper placement. Taking them into my own hands, I began breathing my prayers into the coca. Another kintu was given for the Apus, the mountain spirits. My friend came back to receive the kintus that would be placed in an earthen vessel, along with the others. I gazed out at Lake Titicaca, so incredibly vast, then turned my attention back to the ceremony. 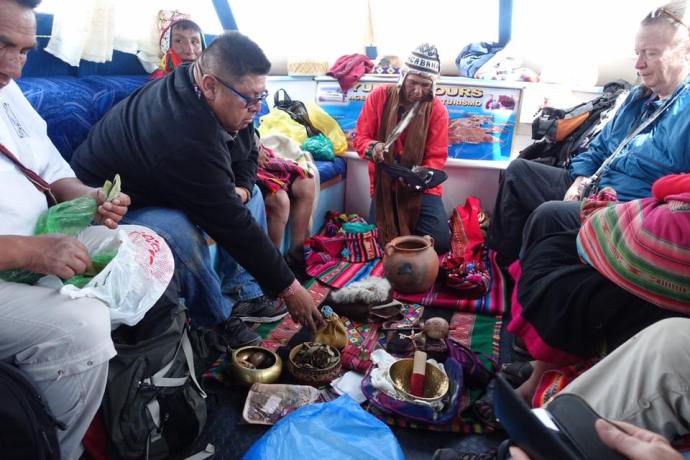 And in that split second, a vision distilled. I say vision but can I say a precise image appeared? No. It was more a sense that something was being woven together. Can I say that I was given a commandment? No. But I was receiving a precise direction. It produced the feeling of something inside settling and becoming solid. A calling I didn’t question. But it still involved asking permission. I sat there with the knowledge.

By then the boat had approached our destination. But first the vessel that held all our prayers and blessings was lowered carefully into the shallow water and came to rest.

That night after dinner I asked Hopi, Q’ero and Aymara spiritual leaders if they would gather in circle with me. I told them of the vision I’d received during ceremony: to invite Hopi, Q’ero, Aymara and Maya Wisdom Keepers on a pilgrimage in 2016 nearly replicating the one we were making this year from Bolivia to Peru with one difference. The culmination would be on Q’ero. While others have brought different traditions together in various locations on a much grander scale, the direction I’d received involved a journey of an intimate, humble nature. I felt that others across the lands who would assist in holding such a space for this pilgrimage would emerge to support it. I asked the Wisdom Keepers if they would tell me what thoughts they had. One by one they spoke agreeing wholeheartedly with this vision.

Only Mallku Roger was silent. When all had finished speaking their piece, he turned to Marvin, our Hopi guest, and said in a strong voice, “I see your pain. And I have the same pain. Your pain is all our pain.” He gestured around this circle of his Indigenous brothers. “We are to help each other. I will never abandon you. We will never abandon each other.”

He spoke at length on the Eagle Condor Prophecy, then turned to me. I swear his eyes bored into my very soul and wouldn’t let me go. “This is like a weaving. We cannot do this alone. There are those who are connectors, people who help. Your vision is correct.”

In that moment, the last vestiges of doubt that periodically played inside my head over the years about the work I’ve dedicated myself to…when I’d get tired…when my faith got called into question…when it seemed like I was swimming against a tidal wave with little forward motion…dissipated.

Later I wondered if last year—when I slipped the despacho into Lake Titicaca—something had been set into motion. One more evolution. Each time it’s never about predicting what is to come as a result. One can’t. But it is about engagement…full engagement to the calling.

To read about the discovery of the Hopi migration petroglyph at Puma Punku and more background, go here.

To learn more about the 2016 Heart of the Andes spiritual travel program in Bolivia and Peru, the intimate pilgrimage honoring the Eagle Condor Prophecy as noted in this writing, go here.

2 thoughts on “A Vision Comes”